Hurricane Maria was a monster Category 5 storm that struck the Caribbean in mid-September and pretty much flattened Puerto Rico’s infrastructure, which wasn’t in great shape before the storm. Restoring electricity has been painfully slow, because of the totality of devastation, plus other complications like the difficulty of shipping all necessary materials to an island, compared with road transport. A recent report found 66 percent of the island residents still have no power. Around 25 percent of Puerto Ricans do not yet have access to safe drinking water.

The 2010 Census put the island’s population at over 3.7 million, but the departures for the United States have been accelerating since the hurricane: more than 168,000 have left for Florida according to a Nov. 18 New York Times article which also noted, “An additional 100,000 are booked on flights to Orlando through Dec. 31” plus more going to other cities.

Such a major transfer of Puerto Ricans may have severe electoral implications. Like other Hispanics, the islanders vote largely Democrat, and when they (as American citizens) relocate to the mainland, they can vote for the presidential candidates, unlike back home. (It’s a weird situation, that derives from the United States having territories where most of the residents are US citizens — Guam, the Northern Mariana Islands, Puerto Rico, and the U.S. Virgin Islands all have US citizenship, but American Samoa does not. Go figure.)

By law, Puerto Ricans are American citizens (!) but culturally they are foreigners from the Caribbean colonized by Spain.

More than a million Puerto Ricans already reside in Florida, and the miserable conditions on the home island will surely convince many more to relocate to the US. Who can blame them? The lights don’t work and no water comes from the tap.

Look to see Democrats work to turn Florida dependably blue by working the expanding Puerto Rican vote. In 2016, 4,617,886 Floridians voted for candidate Trump, while 4,504,975 chose Hillary Clinton — a difference of only a little over 100,000 votes.

Below, a few years ago, Puerto Ricans held Spanish-language signs demanding US statehood for the island — a really bad idea that is popular among pandering politicians. 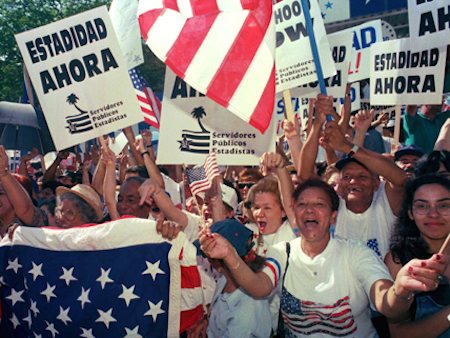 Puerto Rico is officially a bilingual territory. Spanish is the more widely used language on the island, with English being second by a wide margin. A US Census fact sheet showed the question asking “Language other than English spoken at home, percent of persons aged 5 years+ 2011-2015” gave the answer “94.7%.” So a huge influx of Puerto Ricans will bring a bigger push for America to become bilingual — if not officially, then in practice as the US is increasingly becoming Hispanicized because of extreme immigration.

Fox News reported (Nov. 17) on the influx of Puerto Ricans and the resulting strain on local resources.:

STEVE HARRIGAN: They are coming to Florida each week by the thousands. Florida officials say 160,000 now have arrived here in this state since the storm, settling around the Orlando area. . .

Of course the influx of tens of thousands is putting a strain on some communities here. Osceola County has now 2,500 new students. The superintendent says that is simply a massive amount to handle: she said on a typical day they might have 70 brand new students who simply show up at the door, often not speaking English and not with any transcripts. Here’s what she had to say:

DR. DEBRA PACE, OCEOLA SCHOOL SUPERINTENDENT: And it’s adding like like two elementary schools to our population that we were unable to plan for and project.

HARRIGAN: Suddenly two brand new schools to deal with and those schools are expensive as well: $28,000 per student that’s a $70 million dollar unbudgeted expense. The county is asking for help from state and federal agencies.