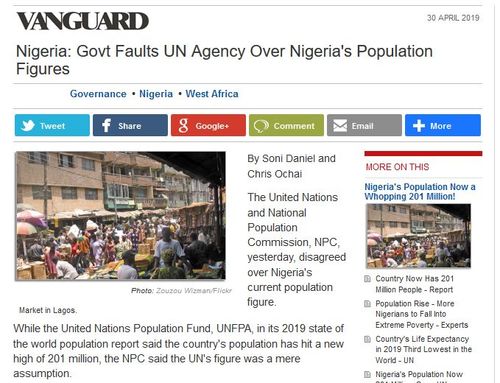 I write a lot about the little-known current population explosion in Africa. It’s worth noting that nobody really knows what the population of sub-Saharan Africa is or how fast it’s growing. That may be reassuring.

Or then again, maybe not …

By Soni Daniel and Chris Ochai

While the United Nations Population Fund, UNFPA, in its 2019 state of the world population report said the country’s population has hit a new high of 201 million, the NPC said the UN’s figure was a mere assumption.

According to the report, the fertility rate among Nigerian women has dropped from 6.4 in 1969 to 5.3 in 2019; this means an average Nigerian woman gives birth to at least five children.

So, nothing to worry about!

It’s almost as if sub-Saharan Africa has a very different culture when it comes to fertility than the rest of the world, and we need more research and discussion of those differences. Evelyn Waugh vividly outlined how different were European and sub-Saharan attitudes regarding fertility limitation in his 1932 novel Black Mischief, but this diversity in outlook is almost forgotten in Western academic discourse today. (I tried to outline some of the fundamental reasons for these differences here.)

The report said contraceptive prevalence rate among Nigerian women aged 15-49 was only 19 per cent, adding that decision making on sexual and reproductive health and reproductive rights among these women had averaged at 51 per cent between 2007 and 2018.

But countering the UNFPA figure, the Director in charge of Census in the NPC, Usman Kolapo, said yesterday that the figure was based on mere projections arising from the 2006 census conducted by Nigeria.

He said: “The fact is that the figure is not as high as that but it is close to it. The UN is just using the basis of the 2006 census to arrive at the figure, taking into account both birth and death rates, apparently using high variant of calculation, which could arrive at that figure.

“But if you use the medium or low variant of calculation of birth and death rates, the figure cannot be up to that. If we had a census, we would have known our true population. We cannot categorically say that our population is up to 201 million.”

Nonsense! The pop is high not doubt but you have to understand what’s driving the fudging of the numbers. Federal allocation (mostly from crude exports) is based on pop size. Creates an incentive for the arid and less developed North to fudge the numbers & inflate its pop size.

I wouldn’t be surprised if both sides were right about Who Is Conspiring Against Whom.

Nobody in Sicily hates anybody quite as much as Southern Nigerians hate Northern Nigerians, and vice-versa, or at least that’s the impression I picked up from parking lot attendants in Chicago 30 years ago.

Here’s a 2018 article from Quartz Africa on the history of Nigeria’s censuses, such as they are:

… But then a chance conversation with a friend produced a eureka moment: “every census in Nigeria follows the formula of the 1963 one” he said. I then went back to the numbers and there it was in plain sight.

Each state’s share of the national population in subsequent censuses (the last one was in 2006) comes out about the same as in the 1963 census, presumably for reasons of political prudence.

It’s kind of like how in Lebanon there hasn’t been a census since 1932. The 1932 census showed that the Christians were the biggest group, followed by the Sunnis and then the Shi’ites. So the Christians got assigned in perpetuity the top political office, the Sunnis the second, and the Shi’ites the third job.

It’s universally assumed in Lebanon that the Shi’ites are now the biggest group, so the Christians are in no hurry to update the 1932 census.

What part of Nigeria’s official census figures can be believed? I’ve generally assumed the total figure of 140 million [in 2006] was perhaps correct and the falsification only happened in the way it was distributed across the states by formula. But there’s reason to doubt even that. In 2010, Donald Duke, the former two-term governor of Cross River state, committed a remarkable act of political class suicide by penning an article detailing how he and his fellow governors rigged elections in Nigeria. Buried in the middle of the piece was this line:

When we conducted the census in 2006 or so, the raw figures said we were over two hundred million; when they went and processed the figures it came down to 140 million.

He was a governor at the time so his claim is at least plausible. …

Nigeria has been due another census since 2016 but lack of funds—the Nigerian government can only fund 51% of the costs and is relying on donors to fund the remaining 49%—mean it is now scheduled to hold this year at a cost of 272 billion naira ($759 million) “if necessary logistics are provided”, according to the director general of the National Population Commission (NPC).

In 2013, the former chairman of the NPC, Festus Odimegwu, managed to talk himself out of a job with a series of controversial comments. 24 out of the NPC’s 35 commissioners asked the president to fire him from his job as they had lost all confidence in him. Before then he had been queried by the presidency for giving newspaper interviews where he said there had never been a credible census in Nigeria, including the one in 2006, and that the 2016 one which he had been charged with conducting was doomed to fail. All of this was intolerable candor and president [Goodluck] Jonathan eventually tired of his antics and fired him in October 2013.

Nigeria does not seem like a country planning to hold a census this year.