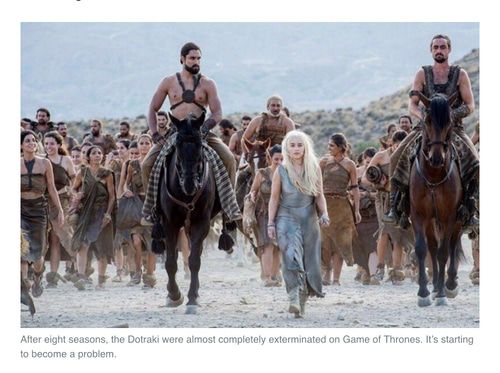 "Game of Thrones Keeps Killing Off Entire Immigrant Populations, and It's a Problem"

Game of Thrones Keeps Killing Off Entire Immigrant Populations, And It’s a Problem

… Where once it seemed like Game of Thrones had something to say about the topic of immigration and the introduction of new populations to the staid old continent of Westeros, I’m no longer sure it’s interested in such heady ideas anymore. It continues to burn up entire ethnicities like kindling in the fire of expensive battle scenes, revealing that it only introduced them in the first place to populate its numerous bloodbaths. Entire peoples with proud, interesting histories have been given the send off of a random red shirt cadet in Star Trek.

Game of Thrones first started teasing that it had something big to say about the human costs of the idea of boarders [borders?] with the Wildlings, or as they preferred to be know, the Free Folk. The group was hated by many of those in Westeros simply because they had been hated for years. It was tradition. While, of course, we know now there was actually a very good reason why the wall had gone up in the first place, most of the characters in the show didn’t believe that White Walkers and other assorted supernatural threats beyond the wall actually existed. Most of them had come to believe that wall was simply there to keep the Free Folk out. The show then spent several seasons humanizing the Free Folk, tracking the peace they eventually came to with the Northerners, and exposing centuries old bigotries as nonsense in the process.

… From a character perspective that’s nice for them, but thematically, lest they change their minds, it means two of the most potentially powerful post-war characters have placed themselves outside of the answer of what would a Westeros with immigrants in place of power mean? Sure some of the Unsullied may survive the battle against Cersei and her rented Golden Army (yet another force of foreigners whose fate seems simply to die in battle), but as that population can’t reproduce and form a lasting society in Westeros, there’s certain themes their fate won’t be able to directly address.

It’s odd, because not only have so many outsiders died to protect the people of the Seven Kingdoms, but some the most prominent characters have foreigners to thank for the skills, experiences, and magic they’ve learned from both Essos and the Free Folk. So it sits a bit awkwardly that there’s very few Free Folks or immigrants from Essos left to share in both the rewards and a slice of the power structure that emerges afterwards.

Sure, maybe given a few thousand more years, the White Walkers, had they survived, could have figure out how to man boats (or at least fly an ice dragon) over to Essos …

Unfortunately, it’s killed off so many immigrants and foreigners that it’s left itself very little to work with.