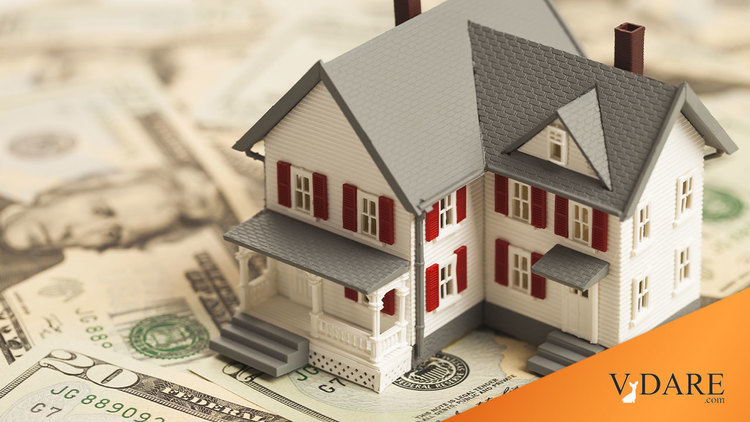 Here's an impressive data-crunching article by Zach Fox of the North County Times, a local newspaper in the relatively affluent northern reaches of San Diego County. As I've been saying, one reason the enormous fraud during the Housing Bubble flew under the national media's radar was because a sizable fraction of the bogus business was being transacted in Spanish, among Spanish-speaking buyers, real estate agents, and mortgage brokers.

A tiny number of real estate brokers is associated with an inordinately large number of foreclosures in North County, raising questions about how just a few salesmen could play a role in sending hundreds of families into foreclosure and causing millions of dollars in losses for lenders. ...

A North County Times investigation into thousands of foreclosure records, along with interviews with buyers, reveals a pattern that suggests some real estate agents specialized in clients —- chiefly Latinos —- who couldn't afford to buy homes, and helped them buy as many as possible.

(Please see "Behind the Numbers" for more on the statistical analysis. )

Basically, Fox has picked out 21 out of about 1000 active real estate brokers whose foreclosure rates on properties sold since 2003 are at least three standard deviations above the mean for the worst neighborhood in North County

A typical real estate office, usually a broker and a group of affiliated agents, has seen from 2 to 4 percent of their buyers' homes go back to the lender.

But the NCT analysis found that 21 brokers have accumulated foreclosure rates of 25 to 60 percent, a figure that could go much higher because many buyers are late on mortgage payments but are not yet in foreclosure.

All of the agents in these offices had similar sales records: They appear to have specialized in finding Latino buyers, and most of the attached mortgages were from "subprime" lenders that specialized in lending to borrowers with weak credit scores.

Together, the offices represent about 2 percent of the sales activity in North County since Jan. 1, 2006.

Yet, since 2007, when the region's foreclosures began to surge, they accounted for 455 foreclosures —- 11 percent of all foreclosures analyzed in the investigation. ...

And the analysis does not show that Latino borrowers have caused more foreclosures than other ethnic groups.

But, it doesn't show they didn't, either — this analysis is focused on brokers, not buyers.

Analysts such as Sandos say that relatively low foreclosure rates are prevalent among Latinos and first-time, entry-level borrowers who participated in government-backed mortgage programs.

In its investigation, the NCT combed through more than 5,800 foreclosure listings in North County provided by ForeclosureRadar, a Northern California data firm, which were then cross-referenced with mortgage data from the county's recorder office and real estate listings.

All but 21 offices had rates of foreclosures that were within the range of what a statistician would find likely [i.e., three standard deviations from the mean in the worst neighborhood — a generous interpretation of "likely," but the point is to isolate brokers who were without a doubt abusive).

Those brokers amassed 1,313 sales in the three years. Through December, 455 of those properties were seized by banks.

That rate of failed loans is more than six times larger than the regional average, which these figures skewed higher.

Several brokers also carried mortgage brokerage licenses, meaning they could sell a house and originate the loan —- a legal role under California law.

Ruling out effects of low income

To reduce the likelihood that foreclosure rates were inflated simply because the 21 brokers catered to low-income borrowers, the analysis compared their figures with homes sold only in North County's most foreclosure-prone neighborhood, Oceanside's "Back Gate" near Camp Pendleton.

With foreclosure rates between 25 and 60 percent, the 21 brokers strayed from even the Back Gate's above-average foreclosure rate, which is 15 percent, by three standard deviations, a statistical measure of probability.

Such large deviations from the average are almost impossible to achieve randomly, said Jim Lackritz, a statistics professor at San Diego State University.

Well, one out of 973 would likely be three standard deviations from the mean through sheer bad luck — if he did all his business in that neighborhood by the USMC boot camp's back gate. (Of course, the shady agents raise the foreclosure rate mean and standard deviation for everybody, so these guys are really, really bad.)

And of those 21, three brokers shattered the standard of impossibility, veering off the average rate by 10 standard deviations.

Ten standard deviations! That's above and beyond the call of duty.

"It's at that point where you have to use the Jim Carrey line from 'Dumb and Dumber': 'So you're saying there's a chance?' " Lackritz said. "Yeah, but not in your lifetime or mine."

Many of the agents working for the 21 brokers sold relatively few houses, with almost all going into foreclosure.

For example, one agent sold nine houses; seven were lost to foreclosure.

But two brokers and two agents sold on a larger scale, making their foreclosure records much more abnormal:

— About 40 percent of all the sales closed at the Century 21 Eldorado office in San Marcos have been seized by banks in foreclosure.

Two brothers who headed the office, Alejandro and Emilio Lopez, were arrested and pleaded guilty to fraud a year ago. Both have been released on parole after serving five months, prison authorities said.

The Lopezes declined to comment through their parole officers.

Romero and his agents have sold 126 houses, 60 of which have ended with foreclosures.

— The largest foreclosure rate among agents with more than 40 sales belongs to Vista agent Eduardo Ramos at 60 percent, or 35 foreclosures out of 58 sales.

— Escondido agent Agustin Castro sold 43 houses over the last five years —- 20 have been lost to foreclosure, a rate of six standard deviations off the average.

In a phone interview, Castro said he sold houses to consumers who entered his real estate office, and that he never had involvement with the loan origination process.

Typically, his customers would "already have a prequalification. They would bring it in, we show them the house and that's about it," Castro said. "I'm not going to ask the loan officer for his qualifications."

Eighteen of Castro's foreclosures had lender data available to the NCT.

All were sold to borrowers with Latino surnames.

Of those, half of the mortgages were issued by Meritage Mortgage or New Century Mortgage —- two relatively small subprime lenders.

And 14 of the purchases were made with no money down. ...

Borrowers and real estate agents who used to work with at least two of the 21 high-foreclosure-rate offices said the salesmen would target low-income Latinos, posting fliers advocating homeownership in certain apartment complexes.

Then, at seminars, the agents would propose that buying multiple homes was the key to becoming rich.

Another person who said she attended Romero's seminars was Irma Sanchez of Encinitas. She didn't buy his pitch, but kept in touch with friends who did, she said.

Soon, they were facing foreclosure.

Real estate agents and brokers who do not originate loans themselves are largely insulated from the question of loan repayment.

It is illegal to encourage homeowners to lie about their incomes. And it is the job of lenders to establish whether a buyer is likely to repay the mortgage.

Yet, the state Department of Real Estate's code of conduct says brokers are "fiduciaries of their clients," a relationship generally understood to mean that brokers must act in the best financial interests of their clients.

The obligation has been widely ignored for years, said Jim Klinge, a real estate agent in Carlsbad.

Klinge has posted a relatively low foreclosure rate at 2 percent, or one foreclosure out of 53 sales. ...

The sales records of Romero, the Lopez brothers, Ramos and Castro —- the four salesmen with ultrahigh foreclosure rates —- had several similarities:

— Essentially all the borrowers, 99 percent, had Latino surnames.

— The majority of mortgages issued on the sales, 93 percent, carried no down payment.

— The list of lenders on those mortgages reads like a graveyard of failed institutions, many of them exclusively subprime lenders: Washington Mutual, Argent Mortgage, Accredited Home Lenders and Fieldstone Mortgage.

Some, though not all, of the real estate agents sold multiple houses to the same person, with all of the purchases going to foreclosure in some cases.

Still, it is unclear how much involvement the real estate agents had in the loan origination process, where any misrepresentation of income —- and therein, any fraud —- would occur.

The NCT was unable to perform a search of who originated each loan because such data is not publicly available, and even most real estate insiders don't have access to it.

Law enforcement officials say that in cases of mortgage or real estate fraud that involve pumped-up prices or inflated incomes, the most common perpetrators of the fraud tend to be the loan officer or the appraiser.

Neither is listed on the documents publicly filed at the county recorder's office for each real estate sale.

Inexperience in some cases

Real estate agent Rico Telles, an independent agent based in Carlsbad, sold nine houses, seven of which have gone through foreclosure.

Telles said he was brand-new to the business in 2006 after working as a car salesman.

Since the housing bust, he said he went back to selling cars until a medical condition forced him off the lot.

Now he tries to keep up with the bills with a smattering of acting jobs.

Each foreclosure had its own reasons, Telles said in a phone interview.

Another agent said his inexperience in real estate contributed to his high foreclosure rate.

Elias Chavez worked with the convicted Lopez brothers out of the Century 21 office in San Marcos.

Chavez, who was not charged, said the office would provide clients and handle the entire loan process.

He sold 19 homes in two years, 14 of which have either gone through foreclosure or "short sale," meaning the bank agreed to sell the property for less than the mortgage.

Average price $474,000, which is fairly downscale for this plush part of the country during the Bubble.

After leaving the office following an FBI investigation, Chavez said he learned more about mortgage origination and estimates that his employers, the Lopez brothers, made $30,000 per sale on mortgage commissions.

Combined with their split of commissions, Chavez said he thinks the office might have taken in as much as $600,000 from his sales.

"I wouldn't say it was my fault for these people losing their homes," he said in a phone interview. "I just think it was unfortunate I didn't know any better."