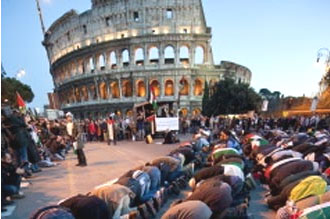 Not all Italians accept provocation in the guise of prayer, however [Muslim Colosseum Prayers Fuel Row, ANSA News, Italy, Jan 19, 2009].

Rome, January 19 - A group of Muslims who prayed in front of the Colosseum during a protest march against the Israeli offensive in Gaza this weekend was accused of threatening behaviour by centre-right politicians on Monday.

Around 50 Muslims knelt with their backs to the Roman amphitheatre and prayed towards Mecca during the march on Saturday, refueling a row over a similar incident that took place in front of Milan's Duomo earlier this month, also during a Gaza protest.

"The pseudo-prayers in Milan and in front of the Colosseum are nothing to do with religion - they are threatening and intimidatory acts towards the Italian people," said Maurizio Gasparri, Senate whip for Premier Silvio Berlusconi's People of Freedom (PDL) party.

"Those who take part should be identified by the police and possibly expelled from our country. People mustn't use prayer as a political weapon".

A former interior minister and chairman of parliament's Anti-Mafia Commission, Beppe Pisanu, described the incidents in Milan and Rome as "a fundamentalist operation, the preliminaries of terrorism".

Congrats to the Italians for not being scared off by the pretense of religion. Muslim BS "pray-ins" need to be smacked down yesterday.