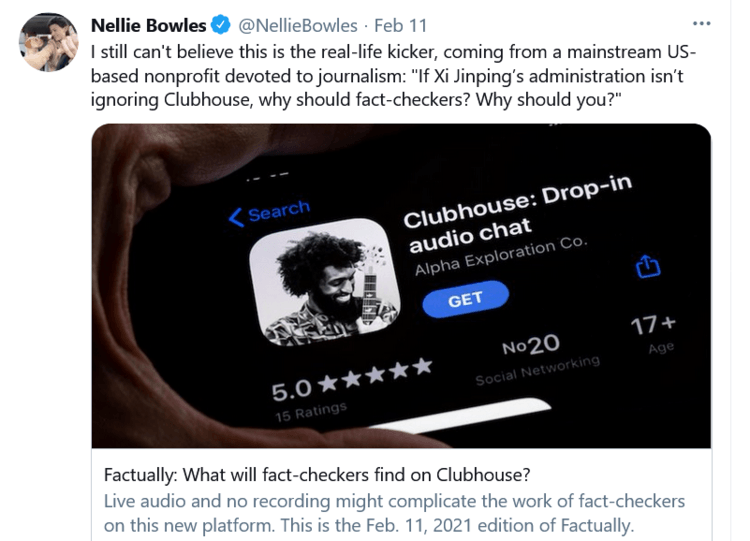 Poynter: Clubhouse Makes It Hard For Snitches, Which Is Bad

From Poynter, a media thinktank:

Factually: What will fact-checkers find on Clubhouse?

Live audio and no recording might complicate the work of fact-checkers on this new platform.

There is a new social media platform trending worldwide. It’s called Clubhouse and it brings together people like Tesla’s Elon Musk and Facebook’s Mark Zuckerberg. For the moment, it seems to be beyond the reach of the broader fact-checking community, but this should change soon.

I joined Clubhouse this week. And it was only possible because I own an iPhone. The hot new network only runs on iOS.

To be accepted, I also had to deploy an invitation code. Downloading the app isn’t enough. To be a Clubhouse user you must know the right people …

As reported by tech websites and popular newspapers, Clubhouse aims to be the most exclusive social media platform ever launched. It offers its users the opportunity to enter different chat rooms (clubs) and share live audio feeds — not text or images — with thousands of other people. Rooms are divided by topic and you can even schedule your participation by scrolling through what discussions will be up in the next hours. …

Writing for online outlet GritDaily, Olivia Smith warned that on Clubhouse, “there’s no path to accountability.” She cited the fact that the app doesn’t keep old posts or audio files and doesn’t allow users to record conversations. “There is no way to prove that someone said anything controversial at all,” Smith wrote.

Someone said something controversial on the Internet, but now there is no way to have them punished for it.

The lack of these features will surely produce barriers for fact-checkers. It will be not only hard to choose what club to join but Clubhouse also requires that fact-checkers listen to hours and hours of conversations before selecting what claims should be assessed.

With the myriad of other platforms fact-checkers are forced to contend with, would it be best for them to ignore Clubhouse for now? Facebook didn’t. According to The New York Times, it’s already building a product to compete with Clubhouse.

Neither did the Chinese government.

On Monday, after a rare moment of cross-border dialogue between users from mainland China and others outside the country, Chinese censors moved in. If Xi Jinping’s administration isn’t ignoring Clubhouse, why should fact-checkers? Why should you?