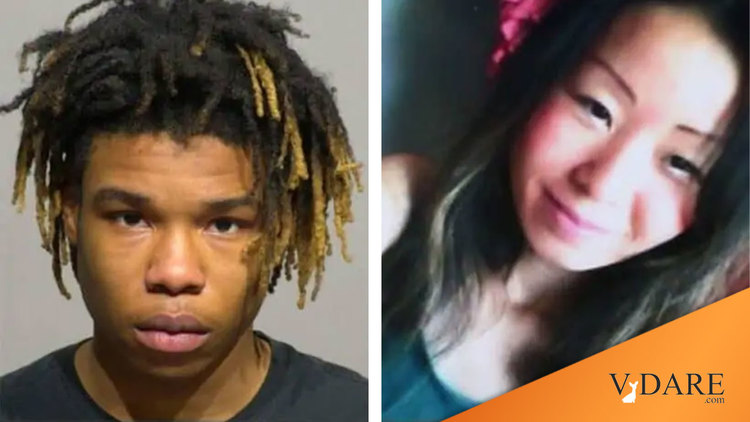 Not National News: The Rape And Murder Of Ee Lee By A "Half-Dozen Or More" Black Youths

See, earlier by John Derbyshire: While We Can Still Say It—THE CENTRAL PARK FIVE COMMITTED A GANG RAPE AND LINDA FAIRSTEIN PROVED IT IN COURT!!!

From the Milwaukee Journal Sentinel:

Two teens, 15 and 17, charged with homicide in beating, assault of woman in Washington Park

Two teenage boys were charged with homicide in the fatal beating of a 36-year-old woman at Washington Park last year.

Kamare R. Lewis, 17, and Kevin T. Spencer Jr., 15, were charged Tuesday in Milwaukee County Circuit Court with one count each of first-degree intentional homicide and first-degree sexual assault in connection to the Sept. 16 attack. …

Ee Lee was found severely beaten and unconscious by the pond in Washington Park the evening of Sept. 16 and was taken to a hospital, where she died from her injuries three days later. Lee died from blunt force trauma to her head and suffered other injuries associated with rape, authorities said.

More: Vigil held for Hmong woman who died Saturday, three days after being found at the Washington Park Lagoon

Video from nearby surveillance cameras suggested about a half-dozen people were somehow involved in the incident, according to the complaint.

The witnesses alleged that Lewis and Spencer punched, kicked and beat the victim with sticks after seeing her on a blanket in the park. One of the witnesses said the defendants pulled her clothes off at one point. Another said he witnessed part of the sexual assault. …

The criminal complaint says DNA evidence from the victim’s clothes links the defendants to Lee. Some of Lee’s clothes were found scattered near a pink blanket about a 100 yards from where she was found unconscious, at the edge of the pond, the complaint says.

There is also DNA evidence linking Spencer to the sexual assault, according to the complaint.

While in custody, the complaint alleges, Lewis admitted to assaulting Lee, but downplayed his role in the incident. He allegedly implicated Spencer in most of the assault.

I look forward to Ava DuVernay’s 2041 movie When They See Us 2 after the Washington Park Six are freed by the landmark decision of Chief Justice Kimberlé Crenshaw that “DNA is racist.”