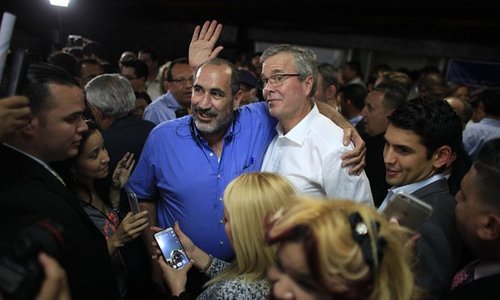 “Puerto Rican citizens ought to have the right to determine whether they want to be a state,” he said. “I think statehood is the best path, personally. To get the full benefits and responsibilities of citizenship, being a state is the only way to make that happen.”  [Puerto Rico seizes on 2016 election to push its case with candidates by Richard Luscombe; The Guardian, April 30th 2015.]

It's an unpopular position, not likely to help Jeb's campaign for the GOP Presidential nomination.

The poll asked whether respondents were more likely or less likely to support Jeb Bush for the Republican nomination due to his support for Puerto Rican statehood as the best path, reported in The Guardian. Respondents had a generally negative reaction to that position: 46% were less likely to support him, while 27% were more likely. A plurality – 28% – was somewhat less likely and 23% said it made no difference, the most common two responses, showing that Bush’s position is certainly not popular, though not necessarily toxic.  [Conservative Intel Poll: Jeb Bush’s Support for Puerto Rico Hurts Him in Iowa by J. Cal Davenport; Conservative Intel, Aug 10th 2015.]

I don't know how good Conservative Intel's polling is, but I'm surprised that the numbers on this aren't a lot worse.  They were never good . . .

In 2012 Angus Reid published an instigative [sic] poll that revealed that only 21 percent of Americans supported converting Puerto Rico into the 51st state.  [The demise of the Puerto Rican statehood movement by Luis Gallardo; The Hill, June 8th 2015.]

. . . but they must surely be even worse now it's clear that the U.S. taxpayer is in the same relation to Puerto Rico as the German taxpayer is to Greece.

And that 21 percent in 2012 was (presumably) of Americans overall, not just Iowa GOP caucus-goers.  I doubt pro-statehood sentiment among Americans has shifted that much in three years.

The status of Puerto Rico is an aspect of the National Question that badly needs addressing.

The island is a colony in all but name.  The U.S.A. should not be in the colonialism business.

The Trump administration should set the granting of independence to Puerto Rico as a high priority.