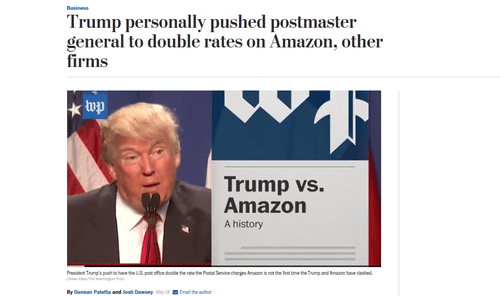 From the Washington Post, which is personally owned by Amazon founder Jeff Bezos:

By Damian Paletta and Josh Dawsey May 18 Email the author

Progressives were outraged that the sacred American principle of giving a lavish government subsidy to the World’s Richest Man was being questioned:

How dare the President of the United States notice that the World’s Richest Man (net worth $131.2 billion, up $64 billion since 2016) isn’t paying his fair share of postage!

But from deep in Jeff Bezos’s Washington Post coverage of the crisis:

David Vernon, an analyst at Bernstein Research, estimates that Amazon pays the Postal Service roughly $2 per package for each delivery, about half of what Amazon would pay United Parcel Service or FedEx. He based this estimate on broader data released by the Postal Service.

What outrage will be next: Perhaps Trump might even mention Carlos Slim rips off Mexican phone customers?

Where is the respect, the deference owed to the world’s richest monopolists?

Remember all those years when Bezo’s firm didn’t have to pay state sales tax because reasons? That’s the kind of submissiveness to the rich that is the essence of liberal democracy.