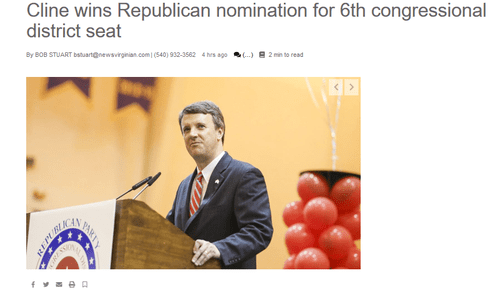 Ben Cline, a member of Virginia’s House Delegates and a former prosecutor, has won the Republican nomination to run against the Democrat in the general election for the commonwealth’s 6th District congressional seat.

That means he’s probably the next congressman. He’ll replace the retiring Bob Goodlatte.

GOP convention delegates gave Cline the nomination with 52 percent of the vote, beating out Cynthia Dunbar, who garnered about 37 percent. The rest were split among the six other remaining candidates.

District delegates met in Harrisonburg Saturday to decide on a nominee from among the eight candidates running for the chance to succeed Goodlatte [Cline wins Republican nomination for 6th District congressional seat, by Michelle L. Mitchell, The News Virginian, May 19, 2018].

To the degree that Cline’s supporters and the establishment Never-Trumpers were correct that a win for hard-shell evangelical Cynthia Dunbar put a very safe, Republican seat in play, which I noted in my recent report on the race, that threat is now over.

The key things about that race were these: First, the two top candidates firmly allied themselves with President Trump, and of the two, Cline had the stronger public position on immigration.

We must secure our southern border by completing the border wall and working to streamline and improve our immigration system. It is time to immediately end visa lotteries, visa quotas, and chain migration. We must continue to deport illegal immigrants and pull all federal funding from sanctuary cities that willfully ignore the rule of law. [bencline.com/issue-positions]

That was good news for immigration patriots. Dunbar was something of a cypher on the issue, and the Gillespians who’ve blown the last two gubernatorial races were warning that she’d lose the seat.

They had better be right about Cline’s being best GOP candidate. We just have to hope he’s the best candidate for the people—the party regardless— on jobs, trade and immigration.