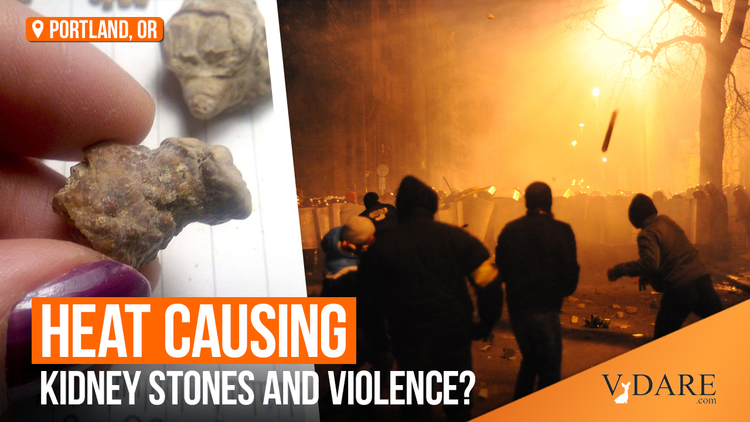 A commenter calls attention to this New Yorker article:

A Hotter Planet Takes Another Toll on Human Health: A new hypothesis about heat waves, redlining, and kidney stones.

For reasons that remain unclear, kidney stones have traditionally been more common among white people, but, in recent years, doctors have noted huge increases among Black Americans and a significant rise in Latino communities. The authors of the new article looked to the past for a possible explanation—particularly to the nineteen-thirties, when a federal agency, the Home Owners’ Loan Corporation, graded all of America’s neighborhoods and deemed some of them “hazardous” for investment, essentially because they were home to large minority communities. This grading system (from A for “best” and B for “still desirable” to C for “declining” and D for “hazardous”) underlay what came to be known as redlining. The grading system led to “chronic disinvestment” in the lower-rated neighborhoods, resulting, over time, in less of everything from parks and green spaces to street trees and air-conditioning in homes.

Now the results can be measured with a thermometer: in Portland, Oregon, the authors report, neighborhoods that were graded A in the nineteen-thirties now “average 8 degrees Fahrenheit lower than the city’s mean temperature, while D-graded neighborhoods average 4.8 Fahrenheit degrees warmer.” Actually, you don’t need a thermometer—that’s a thirteen-degree gap that anyone can feel just by walking across town. No one has carefully studied the incidence of kidney stones among these different neighborhoods, but the authors, in their hypothesis, point to research now under way. Similar work on asthma, another heat-related disease, has shown emergency-room visits are 2.4 times higher in redlined tracts.

Portland is notoriously sweltering, with an average high downtown of 82 in August, the hottest month, and an average low of 59. In June, the averages are 74 and 47.

In general, while neighborhoods where white people live and have seen homeowners plant and maintain more trees, and whites tend to live in the parts of individual cities that are coolest, the question of who lives in the cooler parts of the metro area is not obvious. For example, the historically black neighborhoods of the Los Angeles metro area in the central basin are much more bathed in cool ocean breezes than are the whiter suburban San Fernando and San Gabriel Valleys. In Chicago, while the whiter North Side of the city is somewhat cooler than the blacker South Side, both are near the Lake and thus cooler than the inland suburban white areas like Schaumburg.

In general, the old “inner city” tends to be located near a major body of water, which often has moderating effects on temperature.

In other Portland news, climate change is driving blacks and homeless dudes into a frenzy of gun violence. From The Oregonian:

By Maxine Bernstein | The Oregonian/OregonLive

It surpassed the record of 92 homicides set only the year before. Both 2022 and 2021 far exceeded the previous peak of 70 people who died in homicides in Portland in 1987.

The unceasing toll has left a trail of grief, devastating families and frustrating police and city leaders. Their effort to stem the violence hasn’t slowed it, though Mayor Ted Wheeler and the city’s new public safety director said they have plans to do more this year.

Who died in Portland homicides in 2022

Extra money the city provided last summer for grassroots groups to help interrupt the shootings was short-lived. A special police Focused Intervention Team quickly became overwhelmed, including having seven of its officers placed on standard leave at different times after they were involved in one fatal and two nonfatal shootings. …

Nationally, gun-related injuries became the leading cause of death for young people from ages 1 to 19 in 2020, fueled by an increase in gun homicides, according to the Centers for Disease Control and Prevention.

While murder counts began to taper off last year in almost two-thirds of the country’s major cities that had recorded increases since 2019, Portland bucked that trend.

Both retaliatory gang shootings and shootings involving people living on the street drove up the killings here, police said. …

Other killings stemmed from slights on social media, drug disputes, robberies, domestic violence and random violence, according to investigators. …

More than half of Portland’s homicide victims in 2022 were people of color, mostly Black men – the same breakdown as the year before. That’s far disproportionate to the 6% of Multnomah County’s population that identifies as Black and 3% who identify as Black men.

Also as in 2021, dozens of spent bullet casings of multiple calibers were left behind at many of the crime scenes, suggesting the involvement of multiple shooters, police said.

At least 15 people killed were experiencing homelessness, according to an analysis by The Oregonian/OregonLive. The Police Bureau, tracking homelessness-related homicides for the first time, estimated that roughly a third of 2022′s killings involved homeless people — both as victims and perpetrators — but police wouldn’t identify the specific cases because of ongoing investigations.

Many of those killings involved guns, Hughes said. It’s a departure from the past when knives and beatings often resolved disputes between those living on the street and guns were treated as a commodity to trade for drugs or other things, she said.

It’s hard to know why Portland’s homicide count has continued to increase while it has dropped in other cities — and if or when the pace of the killings will slow, said city officials, police and criminal justice experts.

Even in the cities where homicides are falling, the numbers are still significantly higher than before the pandemic, according to Jeff Asher, a crime analyst based in New Orleans and co-founder of AH Datalytics, a data consulting firm.

Portland’s soaring murder rate might have something to do with the 100+ BLM/Antifa Mostly Peaceful Protests in Portland in 2020.

But, nah, forget that. I’m sure the difference in the murder rate in Portland between the 2010s and the 2020s is due to climate change. Or redlining. Maybe Emmett Till. But it couldn’t possibly be anything that happened in 2020. Except COVID. COVID can explain anything.