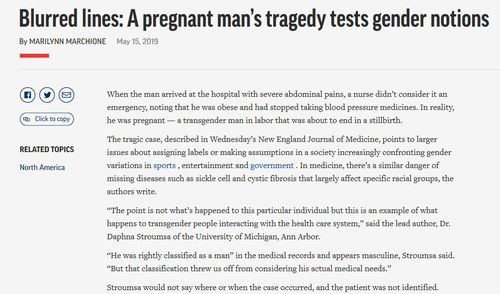 The Way We Live Now: The Pregnant Man In The ER

From the Associated Press wire service:

When the man arrived at the hospital with severe abdominal pains, a nurse didn’t consider it an emergency, noting that he was obese and had stopped taking blood pressure medicines. In reality, he was pregnant — a transgender man in labor that was about to end in a stillbirth.

case, described in Wednesday’s New England Journal of Medicine, points to larger issues about assigning labels or making assumptions in a society increasingly confronting gender variations in sports, entertainment and government. In medicine, there’s a similar danger of missing diseases such as sickle cell and cystic fibrosis that largely affect specific racial groups, the authors write.

So keep in mind: Sex and race don’t exist. Except when they do.

Whatever happens,
We have got
The White Man’s Guilt,
And the Other have not.

“The point is not what’s happened to this particular individual but this is an example of what happens to transgender people interacting with the health care system,” said the lead author, Dr. Daphna Stroumsa of the University of Michigan, Ann Arbor.

“He was rightly classified as a man” in the medical records and appears masculine, Stroumsa said. “But that classification threw us off from considering his actual medical needs.”…

A woman showing up with similar symptoms “would almost surely have been triaged and evaluated more urgently for pregnancy-related problems,” the authors wrote.

… “Medical training should include exposure to transgender patients” so health workers are better able to meet their needs, Wexler said. “A lot of doctors who are practicing didn’t have that in their training” but can still learn from such patients now.

“There are implicit biases that need to be addressed,” Rider said.