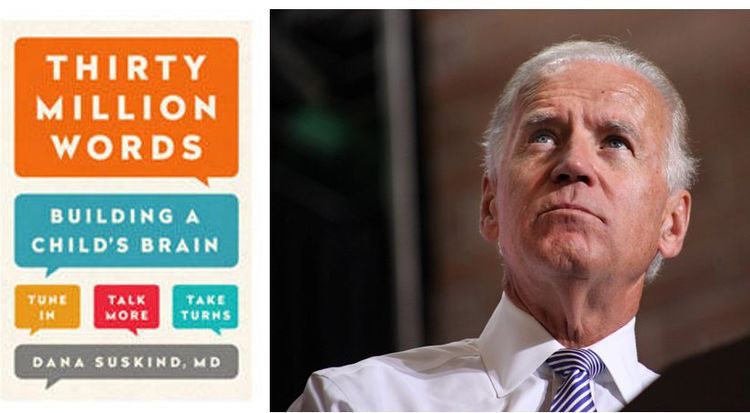 POLITICO: Biden Is Racist for Remembering NYT's Hart & Risley "Millions of Words" Mania of 7 Years Ago

The Ticking Time Bomb in Biden’s ‘Record Player’ Answer
It’s not about his age. It’s about whether he has offended black voters.

There was a smile (some called it a “smirk”) on Biden’s face as he listened to the question. And he answered her this way:

“Well, they have to deal with the—look, there’s institutional segregation in this country. From the time I got involved, I started dealing with that. Redlining banks, making sure we are in a position where—look, you talk about education. I propose is we take the very poor schools, triple the amount of money we spend from $15 to $45 billion a year. Give every single teacher a raise to the $60,000 level. Number two, make sure that we bring in to help the teachers deal with the problems that come from home. The problems that come from home, we have one school psychologist for every 1,500 kids in America today. It’s crazy. The teachers are—I’m married to a teacher, my deceased wife is a teacher. They have every problem coming to them. Make sure that every single child does, in fact, have 3-, 4- and 5-year-olds go to school. Not day care, school. Social workers help parents deal with how to raise their children. It’s not like they don’t want to help, they don’t know what to do. Play the radio, make sure the television—excuse me, make sure you have the record player on at night, the—make sure that kids hear words, a kid coming from a very poor school, a very poor background will hear 4 million words fewer spoken by the time we get there.”

The post-debate commentariat pounced on the “record player” comment, noting that it suggested a lack of familiarity with more modern-day devices, like the eight-track tape or Walkman. It was viewed mostly as a proxy for his age, a self-inflicted wound from a candidate stuck somewhere in the 1970s technologically. But by Friday morning, attention had begun to shift to the broader and far more culturally fraught implications of what Biden was saying: Did he mean that black parents depended on an army of white people with degrees to help them raise their kids?

Well, yeah, the post-2008 consensus in the New York Times and The Atlantic was that the Hart-Risley study had proven that the reason blacks don’t average high test scores is because they were raised in silent, taciturn homes and thus missed out on either 4 million words (as Biden put it) or 30 million words or 32 million words. Therefore the solution was for the government to hire the unemployed college graduate children of NYT and Atlantic subscribers to talk to black children.

Eventually, the economy finally picked up and we didn’t hear so much about this anymore. But here are some of my endless number of posts on this now forgotten obsession of The Establishment:

One element of the conventional wisdom about racial achievement gaps that has become particularly popular in recent years is the idea that the gap is caused by the fact that the parents of poor children tend to have small vocabularies and generally don’t engage their children in mentally stimulating discussions. Much of this tracks back to a project several decades ago by Betty Hart and Todd R. Risley, who recorded 1300 hours of 42 families during various in-home sessions over 2.5 years, and then tabulated every word they said.

Not surprisingly, they found that professional class parents spoke to their children with larger vocabularies, had more interesting things to say, and tended to speak more encouragingly to their children along the lines of “Why, that’s a very interesting observation, honey; why do you think that is?” In contrast, the welfare moms’ tended to more often interact with their children in the “Shut yo’ mouth” mode.

Eventually, NYT subscribers’ humanities major children started to get jobs again and the craze tapered off:

NYT: Maybe Black and Latino Preschoolers Don’t Need to be Kidnapped from Their Parents and Raised by Teach for America Recruits After All
STEVE SAILER • AUGUST 26, 2016 • 1,000 WORDS • 102 COMMENTS [=0/0]

The funny thing is that everybody assumes poor old Joe is going senile and can’t remember anything, but the reality is that Joe remembers the conventional wisdom of just before the Great Awokening just fine, while his critics are baffled by his references. From Politico:

Anand Giridharadas, an author and editor-at-large at TIME magazine, helped trigger a Twitterstorm about the nature of Biden’s comments. “Right now, somewhere, in some newsroom, some brilliant journalist ought to be pitching a big analytical story parsing Joe Biden’s statement and explaining why it was so troubling—and ignored by so many people. It is a textbook example of the racism that is still respectable.”

There’s some anecdotal evidence that other journalists are already on the case. New York magazine writer Rebecca Traister wrote:

“Yes. Syntactically this reminded me of the viral Miss Teen USA answer from years ago. But the substance of what he was trying to say was much worse.” Journalist David Rothkopf wrote: “This is an important and accurate thread. I don’t believe Joe Biden is a bad person. I just think this once again reveals that he is not of this era or suited to lead for nearly the decade ahead.” New York Times columnist Jamelle Bouie joined the thread as well, while also noting the meandering nature of Biden’s words.

They’ve completely forgotten what they no doubt assumed was true in 2012.