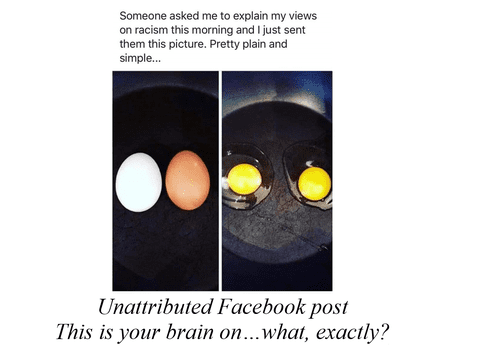 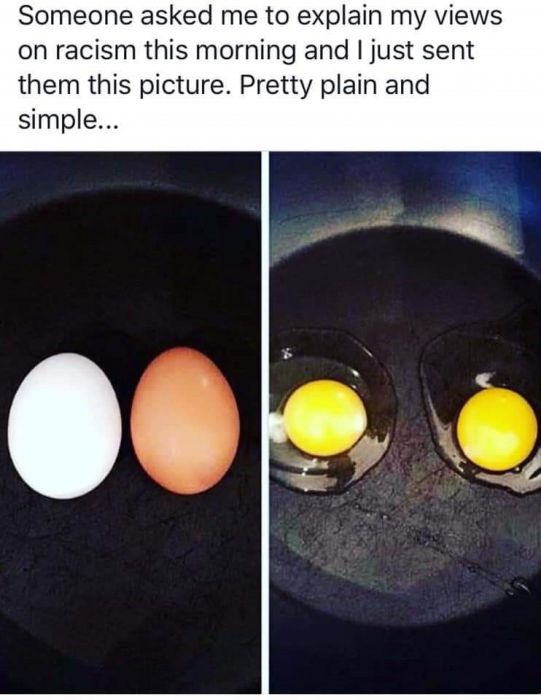 One of the pleasures of Facebook is the opportunity to see the latest virtue signals. Possibly because our President is “literally Hitler” and prominent Republicans are actually suggesting that it might be a good idea to stop alien invasions, the urgency and frequency of virtue signaling seem to be at an all-time high.

A cute meme that has been bouncing around lately involves a photograph of two eggs, one brown and one white, next to a photo of what we are to assume are the same two eggs, shell-less in a frying pan. The caption reads, “Someone asked me to explain my views on racism this morning and I just sent them [sic] this picture. Pretty plain and simple…”

Simple indeed. This looks to me like a great example of what Jonathan Haidt  calls “speaking to the elephant.” It is a message that bypasses the associative cortex and evokes a response from the primitive part of the brain that makes our moral decisions for us. If you are steeped in the sanctimony of the bien-pensants, you will embrace this affirmation of equality with all your heart. The eggs may be of different colors on the outside, but they are just the same on the inside, see? Just like people! No further analysis of this profound message is necessary. Further analysis would be unwelcome, as it would spoil the mood. One usually receives this type of message from very nice people, the sort who say thing like, “There’s only one race: the human race.” How can anyone be so mean-spirited as to burst such a nice person’s bubble? 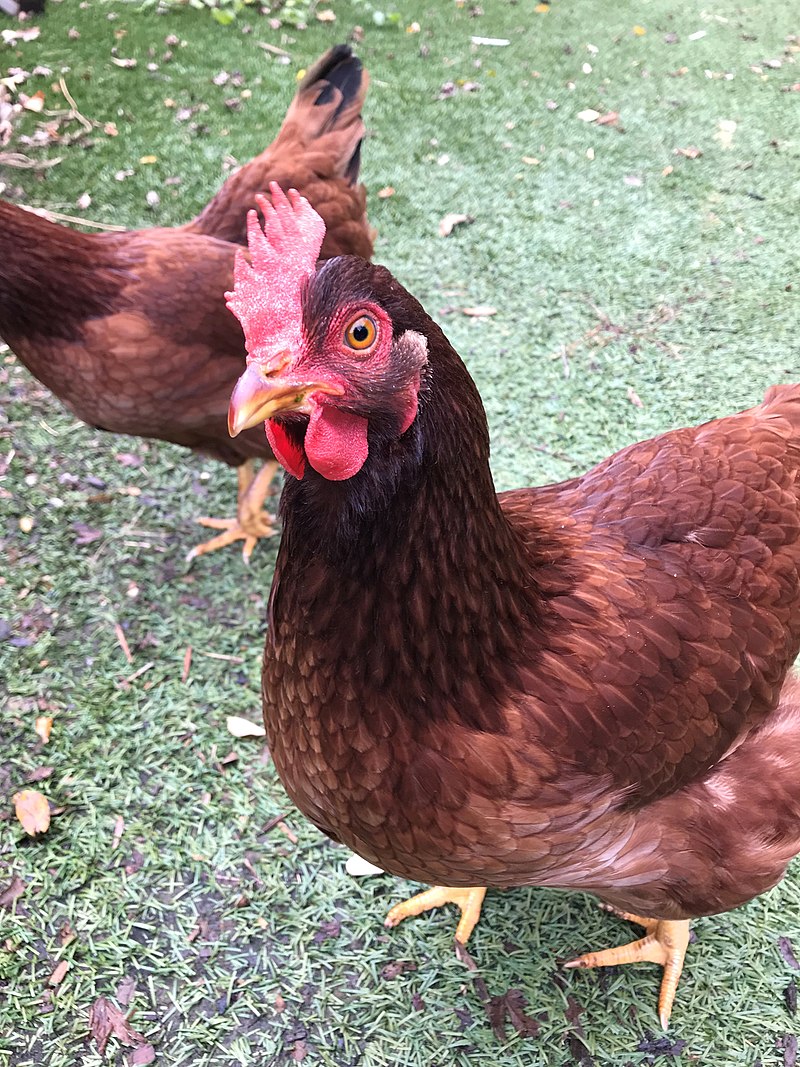 Let us suppose that the eggs are from a white hen and a “hen of color,” respectively. In other words, they are eggs from hens of different breeds. Does anyone seriously believe that all breeds of chickens are the same? Is it possible that centuries of ingenious selection have been utterly pointless and that the resulting diversity offers no corresponding differences in behavior, intelligence, personality, cold tolerance, egg production, meat quality, size, or growth rate? Is it racist to assert that Faverolles are curious, friendly and scatter-brained? Or that Rhode Island Reds (right) have a reputation for bullying? Or that Leghorns are not calm and docile? Would a broad-minded chicken-keeper be well advised to disregard all the stereotypes and stock his coop with a diverse flock representative of the general American chicken population? Would undocumented border-crossing chickens be a valuable addition to our country? Why did the chicken cross the border?

But wait. What if the white egg came from a duck? By the implied logic of the frying-egg meme, there must be no real difference between chickens and ducks! For that matter, why limit the experiment to barnyard fowl? Why not see what happens with turkey, eagle, egret, penguin, and herring gull? Can there be any doubt of the outcome? Avian speciation will be exposed as a nefarious social construct!

This pictorial definition of racism is so anti-intellectual that it loses its punch as soon as it is spelled out in words: Racism is the acknowledgement of non-superficial differences between subspecies or perhaps even between species. This broad interpretation seems justified in that the argumentum ad ovum explicitly invokes fowl and could easily be generalized more widely to other birds. To expand the universalism of the concept, if you grind up a cow, it looks about the same as a horse or a deer.

But it would be a mistake to imagine that the virtue signaler is really interested in animals or even in making a coherent argument. If he were, he might see that he has actually undermined the point that he is trying to make about people. What we all know he really means is that he is spiritually pure because he holds as an article of faith that there are no differences in behavior, intelligence, and personality (BIP) traits between different races of men. If you agree and think the message is clever, you are one of the holy. If you think it’s stupid, you are a deplorable and had better shut up because you’re one utterance away from being called a racist.

Chicken breeds are not a subject with which our urbanized population is very familiar, although the links above should offer an introduction. Even so, everyone knows about dogs. If you want to see intra-species biodiversity on display, with no moral censorship of observation, look at dogs.  You want divergence of BIP traits? Active, sedentary, smart, stupid, friendly, protective, and on and on.

Different races of dogs have their own distinctive characteristics. We do not attach any notion of good or bad to these differences. We approach them realistically. Who would choose a Pomeranian to herd sheep, or a Papillon to hunt ducks? If a Pekingese failed a retriever trial, would we accuse the judges of discrimination or bring a disparate impact lawsuit?

The realism with which we approach animal biodiversity is prohibited by political correctness where human biodiversity is concerned, and that prohibition is policed first at the community level by nice, sweet people who point, splutter, and clutch their pearls. It is enforced by bureaucrats and educators, and now it is rammed down the throats of dissidents by Antifa thugs.

That is why so few recipients of Facebook egg memes will say anything. They fear the frying pan less than the fire.