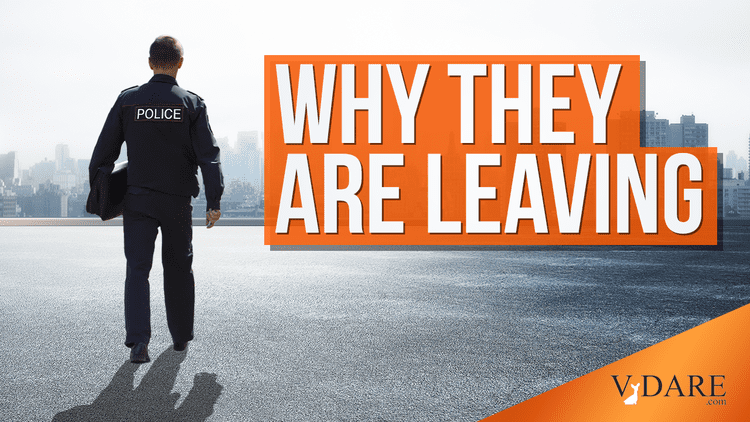 Police Commander Travis Yates: "'You Won't Need to Abolish Us—We Won't Be Around For It': Why Many Police Officers Like Me Are Quitting the Force"

Travis Yates is a police commander in Tulsa, Oklahoma and a graduate of the FBI Academy.  Yates been speaking out about the plight the police are in today due to the distortions and lies of the Mainstream Media and the so-called “Black Lives Matter” movement.

Yates has a powerful op-ed piece on RT, entitled ‘You won’t need to abolish us – we won’t be around for it’: Why many police officers like me are quitting the force [June 10, 2020].

The nasty words we, the police, get called all the time have now turned into rocks, bottles and gunfire. It’s over, America: we are leaving.

It’s not that law enforcement has changed for the worse but everything around it has. The mentally ill used to get treatment and now they just send cops. Kids used to be taught respect and now it’s cool to be disrespectful. Supervisors used to back you when you were right but now they accuse you of being wrong in order to appease crazy people. Parents used to get mad at their kids for getting arrested and now they get mad at us.

For police officers like Yates, being a cop is a vocation, a calling. But now…

I wouldn’t wish this job on my worst enemy…It’s the only job you can do everything right and lose everything. It’s the only job where the same citizens you risk your life for hate you for it. It’s the only segment left in society where it’s cool to discriminate and judge, just because of the uniform you wear. You never get to explain. You can never reason with them. The nasty words have now turned into rocks and bottles and gunfire. I’ve watched it happen to those around me and I have seen the total destruction of their life. This job is a walking time bomb and you could get cancelled or prosecuted on the very next call, even if you do everything right. No profession has to deal with that.

Doctors kill 250,000 people a year. They call them “medical mistakes” because society understands that they do a very difficult job under high stress and they must make the best possible decision in the moment.

Law enforcement is tasked with the same and we are highly successful. Despite the most violent society we have ever seen, less than 1,000 suspects are killed a year. 96% are attacking us with weapons and all but a few others are attacking us with their cars or their fists and more and more with simulated guns so Benjamin Crump (an American civil rights attorney) can help their family win the lottery.

I’ve seen cops risk their own lives when they shouldn’t have… just to keep from taking one. They never get the credit that other professions get.

Cowards are all around us. From chiefs to sheriffs to politicians, no one has our back.

Now, the little we have, we are told they are going to defund us or even abolish us. Citizens with a political agenda will reign over us and all you have to do is wake up and put on a uniform to be a racist.

This weekend I received death threats for just doing my job. It would have been outrageous a decade ago and made national news.  Now, it’s just a Monday.

There will be more threats, more accusations of racism and more lies told about us.  I used to talk cops out of leaving the job. Now I’m encouraging them.  It’s over America. You finally did it.

You aren’t going to have to abolish the police, we won’t be around for it.

And while I know most Americans still appreciate us, it’s not enough and the risk is too high. Those of you that say thank you or buy the occasional meal, it means everything. But those of you that were silent while the slow turning of the knives in our backs happened by thugs and cowards, this is on you.

Your belief in hashtags and memes over the truth has and will create an environment in your community that you will never expect.

If you think Minneapolis will never turn into Mogadishu – it’s coming.

And when it does, remember what your complicity did.

This is the America that you made.