President Trump’s speech to the people of Poland got great reviews, even from critics. Military analyst Ralph Peters counts himself as “skeptical” toward Trump, yet remarked, “That Warsaw speech was to me the most timely and most effective speech given by an American president on European soil since Ronald Reagan said, ‘Mr. Gorbachev, tear down this wall.’ ”

The speech was a salute to the Polish people’s pursuit of freedom, and contained many references to their history of having to fight for it. (Transcript.) Watch:

With all the historical references, there was one hero omitted — Jan Sobieski, who as the king of Poland saved Europe from the Muslim Ottoman invaders in the 1683 Battle of Vienna. The pope called him the savior of Christendom because he prevented an Islamic takeover of Europe.

The battle’s cavalry charge was said to be the largest in history and was memorialized in a 2012 film, which highlighted the amazing winged hussar horsemen (3:15):

Fortunately, the great king was not forgotten during President Trump’s day in Poland: 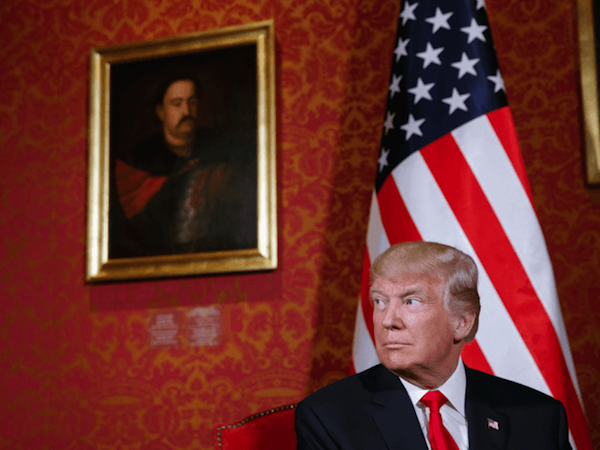 President Donald Trump’s first photo-call in Poland after his arrival in Air Force One was with President Andrzej Duda and saw him sat beside an oil painting of a prominent figure in Polish history and folklore — the 17th-century king who kicked Islam out of Central Europe and is remembered as “the Hammer of the Turks”.

Warsaw’s Royal Palace, where the meeting took place — lavishly reconstructed after it was dynamited by Nazi German troops during the Second World War — benefits from a surfeit of grand rooms and hundreds of works of art.

From oils of kings and statesmen by artists such as Rembrandt to impressive murals and sculpture, the Polish authorities had a great deal of choice for where to host the symbolic first meeting of President Trump’s first European visit.

It may be seen as a remarkable coincidence, therefore, that of all the rooms and of all the paintings, they chose to sit President Trump besides a portrait of one of Poland’s best-known warrior kings. King Jan (John) III Sobieski is today remembered and celebrated in Poland, and elsewhere in Central Europe, for his pivotal role at the Battle of Vienna in September 1683. 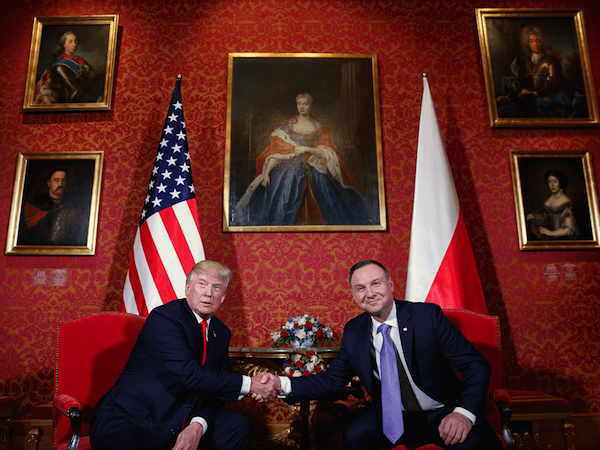 At the culmination of the two-month siege of Vienna by the forces of the Ottoman Turkish Empire, Sobieski led an army to relieve the city. Despite leading a force significantly smaller than the invading Ottomans, the coalition of Polish and Germanic troops staged one of, if not the largest, cavalry charge in the history of warfare and defeated the Ottoman army — ending centuries of Islamic attacks and invasions reaching the heart of Europe.

In today’s Poland, concern over the place of Islam in Europe continues — and the nation’s strong opposition to mass migration from non-Europeans has caused enduring friction with leaders in Brussels and Berlin, who are fully dedicated to open borders.

In a poll taken to coincide with Trump’s arrival in the country, when asked whether they would be willing to forego European Union money if it meant being able to continue blocking migrants from outside Europe, the majority said they would rather maintain their culture and nation and forego the cash.

The news may come as a blow for planners in the European Union, who have recently threatened to turn off the tap of development funds — of which Poland is the largest recipient — if they do not agree to open their borders.

Anglo-Polish expert on royalty and European history Rafe Heydel-Mankoo spoke to Breitbart London and said of the juxtaposition of King and president: “Having routed the Ottomans and saved Christendom, King Jan III Sobieski took the captured green standard of the Prophet and sent it to the Pope, along with the words “Veni, Vidi, Deus Vicit” (I came, I saw, God conquered).

“I suspect the president would be more likely to declare: ‘Trump came, Trump saw, Trump Conquered.’

“If President Trump now believes in NATO and seeks Turkey’s cooperation in the region, he might want to downplay association with a king nicknamed ‘The Hammer of the Turks’.”