Fast-food restaurants are a major target for automation developers because of the high labor costs connected with preparing food and dealing directly with customers. Kiosks for ordering food have begun appearing as a result of their simple design. In February for example, Wendy’s announced it would install kiosks in 1,000 restaurants (around 16 percent) by the end of the year.

Machines that make the food require more advanced moving parts, but those are coming along also, such as the Flippy burger cooking robot, shown below:

Below, the Flippy robot cooks the meat while a human worker assembles the burgers. 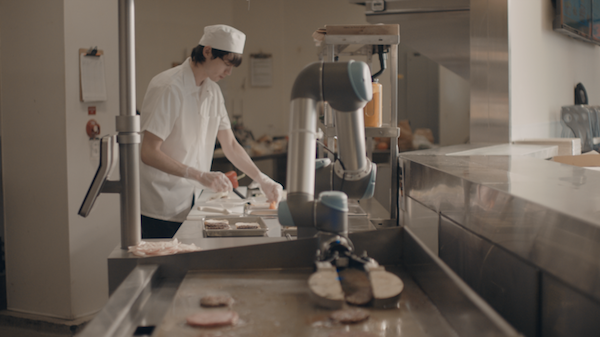 It’s always interesting when a top CEO in an industry makes a prediction of when automation will come on big. The CNBC article below mentions a recent interview with Greg Creed, the CEO of Yum Brands, saying robots would replace most fast-food workers by the mid-2020s, and here it is:

Restaurant work is a popular occupation for unskilled immigrants and illegal aliens because most of the basic tasks can be easily learned. A Pew Research report from earlier this year found that 22 percent of food preparation and service workers were legal and illegal immigrants. A Census survey from 2015 shows that restaurants employ nearly 2.3 million foreign-born workers, a number used in the CNBC article.

So the government’s persistence with old-style levels of immigration to fill these jobs is a fool’s errand, considering the forecast that most restaurant work will be done by machines in a decade from now. For that reason:

Why isn’t Washington paying attention to the rapidly changing workplace?

● A burger-flipping robot called Flippy will be at work in CaliBurger restaurants by early 2018.

● Miso Robotics, the inventor of Flippy, has raised $3.1 million in Series A venture funding.

Grilling burgers may be fun on the Fourth of July, but less so if hot grease is your daily grind.

Enter Miso Robotics. The southern California start-up has built a robotic “kitchen assistant” called Flippy to do the hot, greasy and repetitive work of a fry cook. Flippy employs machine learning and computer vision to identify patties on a grill, track them as they cook, flip and then place them on a bun when they’re done.

In a recent CNBC interview, Yum Brands CEO Greg Creed predicted robots would replace fast food workers by the mid-2020s. It’s not as if workers love those jobs.

Employee turnover in the restaurants and accommodations sector was 73 percent in 2016, according to data from the Bureau of Labor Statistics. Fry cooks, the people who flip burgers (or fillets) all day at a hot grill, move on from the job faster than others in the field.

Rather than build a robot from the ground up, Miso integrates the best of available components on the market, including robotic arms, sensors and cameras. It develops proprietary control software to enable the robots to work as cooking assistants in complex environments right alongside humans, said CEO David Zito.

“We take into account all of our customers’ needs for everything from food safety to maximum uptime,” he said. “Today our software allows robots to work at a grill, doing some of the nasty and dangerous work that people don’t want to do all day. But these systems can be adapted so that robots can work, say, standing in front of a fryer or chopping onions. These are all areas of high turnover, especially for quick service restaurants.”

The company will use the capital to produce its first commercial Flippy units. It expects to roll Flippy out, starting at the Los Angeles CaliBurger, in the first quarter of 2018, Zito said. Along with its investment, Acacia will provide the start-up with patent and intellectual property-related services, helping Miso Robotics prepare for global expansion.

“I see robotics in the kitchen as kind of an extension of going from the open flame to the oven,” said Rob Stewart, Acacia’s president, in an interview. “It’s next-level efficiency,”

What does this mean for the industry’s 2.3 million cooks?

“Like the electronic spreadsheet did for accountants, this will cause the jobs to go elsewhere,” Stewart said. “But there will be new hospitality and culinary jobs we have yet to imagine. And those will be jobs where people will get paid a higher wage, and where they’ll want to stay long-term.”