African Refugees Disgusted by Latvia's Chilly Weather, Stingy Welfare; Mad at EU for Not Sending Them to Generous Germany

Many refugees relocated to the small Baltic states by the EU face alienation and poverty and end up moving elsewhere in Europe.

It is a headache for the EU, already embroiled in a bitter dispute with Poland, the Czech Republic and Hungary over their refusal to accept refugees.

Mekharena, an Eritrean, came to Latvia from Italy a year ago. Reaching Europe was an odyssey – he came via Uganda, Ethiopia, Israel and Egypt. 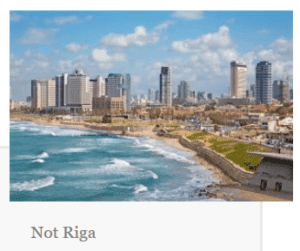 But how could he survive in an impoverished Third World ruin of a country like Uganda, Ethiopia, Israel, or Egypt?

He only learnt he was going to Latvia a day before his flight. He was not allowed to choose the destination himself, and was not happy about it.

“There are lots of Eritreans everywhere in Europe. They talk to one another. We all know that in Germany they give you an apartment and €400 (£439; $568) pocket money. But in Latvia they don’t give us anything – just €139 a month,” he told BBC Russian.