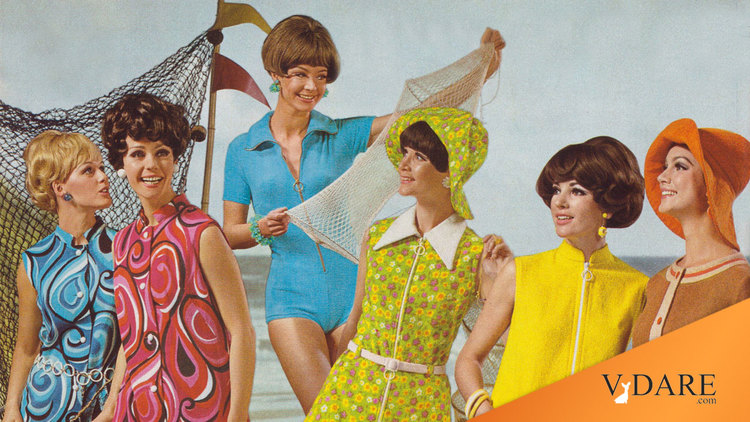 PNAS: Misperceptions Arise From A Stereotype That The Present Is Far More Liberal Than The Past

Here’s a new study from PNAS that vindicates a point I’ve long been making. Even though we hear constantly about how Boomers won’t shut up about the 1960s, in truth progressives have largely forgotten that, on many issues, they won over a half century ago and have been running things ever since.

Significance
People change when they think others are changing, but people misperceive others’ changes. These misperceptions may bedevil people’s efforts to understand and change their social worlds, distort the democratic process, and turn imaginary trends into real ones. For example, participants believed that Americans increasingly want to limit immigration, which they said justifies tighter borders. However, participants also said that limiting immigration would not be right if attitudes had shifted against it––which is what actually occurred. Our findings suggest that the national discourse around contentious social issues, policies resulting from that discourse, and perhaps the opinions that drive discourse in the first place would be very different if people better understood how attitudes have and have not changed.

Abstract
America is embroiled in cultural wars over abortion, immigration, gun control, climate change, religion, race, gender, and everything in between. Do people know how much attitudes have shifted on these contentious issues, or even which side is winning? Two preregistered studies suggest they do not. In Study 1, we asked a nationally representative sample of participants to estimate how 51 different attitudes had changed over time and compared their estimates to actual polling data. Participants overestimated the amount of change on 29 attitudes (57%), underestimated change on 10 attitudes (20%), estimated change in the wrong direction on 10 attitudes (20%), and estimated change correctly on only two attitudes (4%). In most cases, participants did not know whether an attitude had grown to a majority or shrunk to a minority. These misperceptions had little to do with participants’ demographics or ideologies and seemed instead to arise from a stereotype that the present is far more liberal than the past.

In this graph, the dark dots represent views in public opinion polls over recent generations, while the two orange dots represent current views in the author’s new survey of what contemporary Americans think Americans would have said at the beginning of the time period for which there are actual survey results and what they say today: Why these consistent misperceptions?

One reason is because it’s hard to know what the past was like if you didn't live through it, and even if did.

I’ve been very interested in public affairs controversies and opinion journalism since the end of the 1960s, but most people have better things to care about.

And I can place a lot of memories fairly precisely—e.g., I was in 7th or 8th grade when I read in the Sunday L.A. Times that such and such. With the existence of the internet, I’ve been able to check up on a lot of my recollections and it often turns out I was wrong: it was the 6th grade or the 9th grade. But I’m not too far off because my natural tendency is to try to place my memories in a historical narrative of cause and effect. But, that’s pretty weird.

One recommendation I’d make is: Here’s a simple heuristic: Always keep in mind that The Sixties were a big deal. (To be precise, a lot of the mass impact of The Sixties happened in the early Seventies.)

The Sixties used to be the most famous decade in history, but they don’t fit well into the Woke worldview.

Another reason people have a hard time remembering The Sixties is because it undermines Woke diversity arguments which have become increasingly antiquarian. If affirmative action began 53 years ago rather than sometime last week, and if women became welcome in the business world in the 1970s, then the fact that there aren’t many black or women billionaire tech founders in Silicon Valley in 2022 might have less to do with discrimination in the past than with continuing differences between the races and sexes.

But that’s not conducive to grabbing money, so we are not supposed to think about that.