Hungary has decided to adopt the Israeli model for combating mass immigration.

Hungary has begun building a fence on the country's southern border with Serbia, meant to stem the unprecedented flow of migrants, the government said Monday.

Military personnel began working on a 150-meter (490-foot) "sample section" Monday morning on the outskirts of the town of Morahalom, where a bulldozer and other heavy machinery were preparing the ground for construction, according to a joint statement from the interior and defense ministries.

"A daily average of 1,000 illegal border crossers are arriving in Hungary, so illegal immigration has become a severe problem and its control a prominent task," the ministries said.

Government spokesman Zoltan Kovacs said Hungary was committed to building the fence, which it says is a temporary measure.

The mayor of Morahalom, Zoltan Nogradi, said he had not been told in advance about the start of construction, but welcomed the initiative.

Hungary has been targeted by the United Nations for destruction because the government of Viktor Orban refused to go along with multiculturalism. But the European Union is also trying to punish the country. For example, Orban had to back down after initially resisting EU rules about being forced to receive asylum seekers. 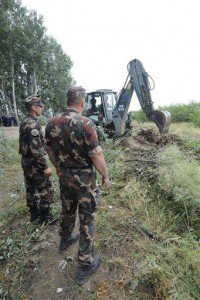 Hungary on Wednesday reversed its decision to suspend a key EU rule on the processing of asylum claims, a day after announcing the move.

"(Foreign) minister Peter Szijjarto has informed his Austrian counterpart that Hungary was not suspending any rule of the European Union," the foreign affairs ministry said in a statement.

The government said it had merely requested a period of grace from fellow EU member states to help deal with the tens of thousands of refugees arriving in the country.

The Right-wing government of Hungary prime minister Viktor Orban had caught Brussels by surprise on Tuesday when it announced it was indefinitely opting out of the so-called Dublin III regulation because of "technical reasons".

[Hungary reverses decision over suspension of EU rule on taking back asylum seekers, The Telegraph, June 24, 2015]

While the attention of the world is focused on Greece, the arguably more important political battleground is Hungary. Greece may be forced to exit the Euro for financial reasons, but Hungary may find it is in their best interest to leave the European Union so it is no longer subject to international powers telling the country it is not allowed to enforce immigration laws. As "migrants" continue to swamp Europe, the issue will only become even more important. And even if Orban doesn't especially want to leave the EU, he is facing pressure to his right from the rising Jobbik Party.

For that reason, pay careful attention to the relationship between Hungary and Russia, as Putin attempts to build an opposing bloc of allies to confront the EU. Hungary is going to need international allies.

Of course, Hungary could form relationships with patriotic forces in the West. But the government of Orban decided they would rather arrest possible allies to kiss up to the hard Left—assuming it was actually Hungary's decision, and not the result of American pressure.