The newsprint title of Friday’s front-page Washington Times story is “Germans sell their own version of the American dream,” including a photo of the new diversity: 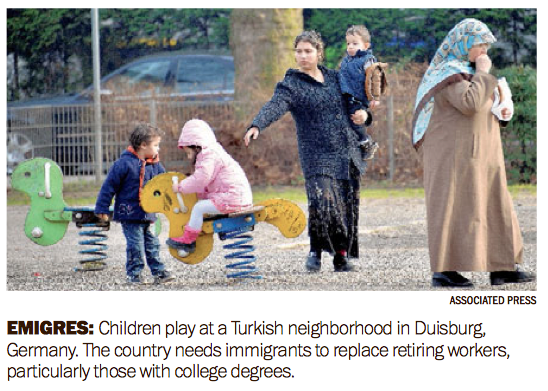 The narrative is a familiar one: many native Germans are retiring and business needs more worker bees to do the jobs. At least Germany is looking for skilled persons capable of contributing to a modern economy rather than admitting millions from the third world headed straight for the permanent underclass, as America is doing.

Still, Germany is not immune from technological progress and business must be undergoing the same transformation of robots and computers that’s happening in this country. Unemployment has increased in recent months, to the surprise of economists, which may be a hiccup or part of a trend affected by greater efficiency. So perhaps the optimum number of immigrant workers is fewer that elites imagine.

The German people are not altogether enthused about immigration. Thilo Sarrazin’s 2010 book criticizing Muslim immigration (Deutschland schafft sich ab — Germany Does Away with Itself) became a huge best-seller by saying what many people were thinking.

Even so, the German government preaches the gospel of Diversity Is Our Strength as it puts out the welcome mat for more immigrants, including a “Success Through Diversity” competition to recognize businesses that don’t hire Germans.

BERLIN — When Marie Duness-Rose, 39, immigrated to Germany from Bulgaria 10 years ago, she left a lot behind, she says. But now she holds a management degree and runs a thriving bistro serving Balkan food in a popular neighborhood in Berlin.

She is one of about 6.2 million non-German citizens in the country and one of about 15 million — or 19 percent of the total population — who are not ethnically German.

That percentage is one of the highest proportions of immigrants in any European country, and it is not expected to decrease any time soon. Last month, the Organization for Economic Cooperation and Development determined that Germany is the world’s second most popular destination for immigrants after the United States.

Unlike many other countries with large immigrant populations, Germany’s government and industry wants it to stay that way.

“The figures are great news for the German economy,” said Oliver Koppel, senior economist at the Cologne Institute for Economic Research.

That’s because Germany has one of the world’s oldest populations and Europe’s second-lowest birthrate, after Monaco. The country needs immigrants to replace retiring workers, Mr. Koppel said, adding that there are about 1 million unfilled jobs in Germany, and one-quarter of them require university degrees.

“This gap poses a threat to German economy, because companies may choose to relocate if they cannot fill their vacancies,” he said. “I know of several businesses that moved to Austria in the past years in search of more workers.”

Analysts estimate that worker shortages already cost Germany as much as $40 billion a year. Yet demographers warn that Germany’s working population will drop by 6.5 million over the next two decades — a decrease equivalent to losing every worker in Bavaria, one of Germany’s richest states.

Faced with these figures, the German government acknowledged the country’s dependence on immigrants to sustain the population and long-term economic growth. In 2013, Chancellor Angela Merkel said Germany needs to become an “immigration country” and that “increasing diversity also means enrichment.”

Since then — while anti-immigration politicians have won office in France and Britain — Germany has been wooing highly skilled foreign professionals and is competing for qualified people from abroad. The government has created several types of work visas for immigrants, and newcomers now are welcomed with German integration and language courses.

The government has even fashioned its own version of the American dream, with its “Make it in Germany” campaign. Launched in 2012, this online platform lures non-German-speaking skilled immigrants with the promise of a lucrative future. More recently, the government established “Success Through Diversity,” a competition that awards businesses that have internationalized their staffs.

The immigration influx is not only a result of government initiatives, however. Germany also is benefiting from instability abroad, especially in Europe.

Young Spaniards and Italians have been flocking to the central European country since the 2008 financial crisis and the ensuing European sovereign debt crisis. As of January, Bulgarians and Romanians have the right to travel through the EU, on their way to the Continent’s most powerful economy, and stay — just like Ms. Duness-Rose.

“I had good friends in Sofia [Bulgaria's capital]. I owned my own apartment, and I had my family close by,” she said. “But there just weren’t any job prospects, so I moved. I may have come for the work, but I stayed because I felt, and still feel, at home.”

She also is happy to hire her countrymen to work in her business.

“I actually now have two young men from Bulgaria working in my restaurant,” Ms. Duness-Rose said. “I am happy to be able to help them, even though I have noticed that some people eating in the restaurant comment on how many Bulgarians now work in Berlin.”

During the economic boom of the 1950s and 1960s, many foreigners came to Germany as “Gastarbeiter,” or guest workers — a workforce intended to stay only temporarily. Little effort was made to integrate them, and in 1973 the government officially stopped importing foreign workers.

But many did settle. About a quarter of all foreigners in Germany are Turkish guest workers’ descendants and families. The Turkish community participates fully in commercial life. At the same time, it has been the main target of anti-immigrant sentiment, sometimes spilling over into xenophobia.

From 2000 to 2006 a racially motivated killing spree by a small group of neo-Nazis left 10 people dead — eight of them ethnic Turks. In 2010 German politician and former Deutsche Bank board member Thilo Sarrazin wrote a book claiming Muslims and the underclass were bringing about Germany’s downfall. It was Germany’s biggest best-seller since the end of World War II.

More recently, the sheer number of immigrants from Eastern Europe has sparked complaints.

Germany’s government is trying to crack down on EU citizens entering the country to get welfare benefits. According to a recent government report, 300,000 people from other EU countries collected the Hartz IV social welfare benefits in 2013 worth $2.23 billion out of $43.3 billion in total.

Meanwhile, periodic unrest breaks out over immigrants. In 2013 demonstrations broke out against 1,000 Roma living in a high-rise apartment building in western Germany. The far-right NPD party campaigned in last year’s election with the slogan “Money for Grandma and not for Sinti and Roma.” (Sinti refers to a subgroup of Roma, the traditional itinerant people pejoratively called Gypsies.)

That slogan reflects a largely outdated view of foreigners in Germany. For years the country framed the immigration debate as a humanitarian one that focused on asylum seekers or refugees.

“The idea was basically that we Germans were helping others by allowing them to live here,” said Stephan Sievert of the Berlin Institute for Population and Development.

Ms. Merkel’s embrace of immigration appeals to a different strain of thought: She is hoping to expand perceptions of immigration to include economic self-help too. This year, legislation allowing young Germans of foreign origin to hold two passports was passed under her coalition government, a move that particularly benefits the large Turkish community.

“The shift in attitude is really striking,” Mr. Sievert said. “People now understand that we need immigration, whereas before immigration was seen as a humanitarian issue costing Germany. It’s now seen as an economic issue benefiting Germany.”

Still, Mr. Sievert does not believe the current influx of immigrants will fill the gap in Germany’s labor market. Almost 70 percent of immigrants to Germany come from other EU member states. That can’t go on forever, he said.

“Many countries in Europe are grappling with low birthrates,” he said. “So, in the long run, we cannot hope to compensate for our own aging population with only other Europeans.”

Ms. Duness-Rose is a case in point. She met her Latvian husband in Germany. The couple never had children, however.

“We were working too much for that,” she said.