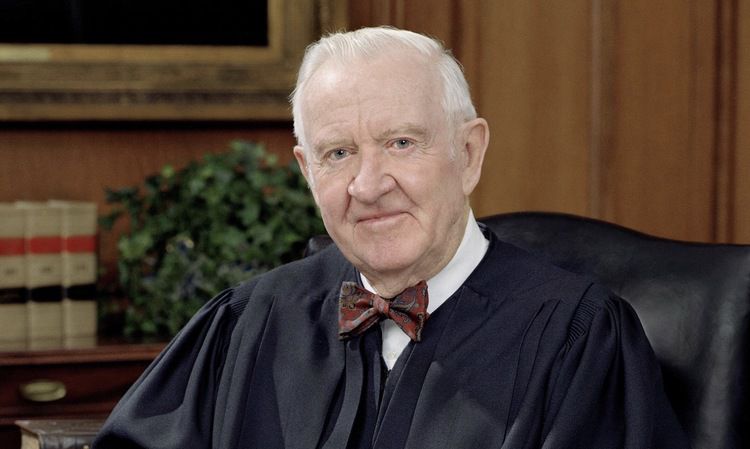 Former Supreme Court Justice John Paul Stevens, born in 1920, is dead at 99. He was one of the many Republican-appointed Justices who betrayed conservatism, Republicans, and America on the Supreme Court.

In Is a Trump Court in the Making?, Pat Buchanan listed some of the judicial turncoats, and said “Gerald Ford's sole nominee, John Paul Stevens, confirmed 97-0 in the Senate, turned left soon after his confirmation to join [Harry] Blackmun.”

In addition to joining Blackmun in Roe v. Wade, Stevens was also one of the votes for Plyler v. Doe, which forces American schools to educate illegal alien children and “youths”.

When Stevens retired, to be replaced by Elena Kagan, there were no White Anglo-Saxon Protestants on the court.

In retirement, Stevens came out against gun rights (opposing the Second Amendment, and the Heller vs DC decision) and free speech rights (the First Amendment decision in Citizens United). See Former Justice Stevens on the 3 worst Supreme Court decisions of his tenure | PBS NewsHour, May 15, 2019. (The third was Bush v. Gore.) He also took it upon himself to declare Brett Kavanaugh "unfit" for the crime of fighting back.

When Stevens retired in 2010. Steve Sailer noted, based on an Ann Coulter column, that a younger Stevens had dissented on quotas:

something that has been lost in all the tributes by the media to the retiring Supreme Court Justice John Paul Stevens. A long time ago, in the government contracting quota case Fullilove, he noted that quotas are essentially reparations, and asked why then are we giving reparations to voluntary immigrants from south of the border?

In another case of government race-based classifications, Fullilove v. Klutznick (1980), Stevens ridiculed the idea of race-based "remedies" being applied to every ethnic group under the sun.

Adopting Justice William Rehnquist's view that the specific history of blacks in America makes their claims unique, Stevens wrote: "Quite obviously, the history of discrimination against black citizens in America cannot justify a grant of privileges to Eskimos or Indians." (Remember when you could use terms like "Eskimo" and "Indian" without being accused of a hate crime?)

Unlike blacks, who were "dragged to this country in chains to be sold in slavery," Stevens said "the 'Spanish-speaking' subclass came voluntarily, frequently without invitation, and the Indians, the Eskimos and the Aleuts had an opportunity to exploit America's resources before the ancestors of most American citizens arrived."

In 2003, Stevens joined the pro-“quotas for minorities” majority in the University of Michigan quotas decision. Now he has joined the Great Majority.