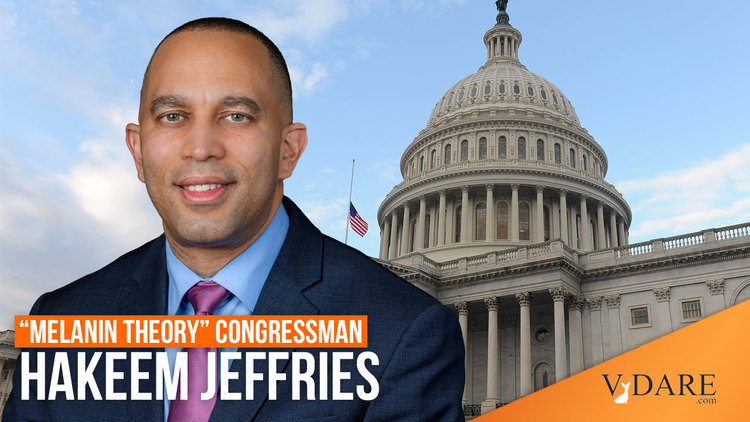 From Wikipedia on Professor Leonard Jeffries, the uncle of Rep. Hakeem Jeffries (D-NY), the frontrunner to succeed Nancy Pelosi as leader of House Democrats:

He is known for his Pan-African Afrocentrist views—that the role of African people in history and the accomplishments of African Americans are far more important than commonly held.

[Leonard] Jeffries is a proponent of melanin theory, which posits that greater skin pigmentation makes Black people inherently superior to white people. He says melanin allows Black people to “negotiate the vibrations of the universe and to deal with the ultraviolet rays of the sun.” Jeffries has stated (but not published) the idea that whites are “ice people” who are violent and cruel, while blacks are “sun people” who are compassionate and peaceful; historian Mia Bay attributes the origins of this hypothesis to the writings of anthropologist Cheik Anta Diop as well as Michael Bradley, author of The Iceman Inheritance.

In July 1991, during a speech at the Empire State Black Arts and Cultural Festival in Albany, New York, Jeffries asserted that Russian Jews and the American Mafia were behind a conspiracy of Hollywood film producers to denigrate Black people, and that Jews had also controlled the Atlantic slave trade. His remarks were broadcast on cable television, drawing angry responses from Italian and Jewish Americans.

In 1992, Jeffries first got his term shortened from three years to one, and was then removed as chairman from the department of African-American studies, but was allowed to stay as a professor. Jeffries sued the school and in August 1993 a federal jury found that his First Amendment rights had been violated. However, Jeffries had been unanimously reappointed as chairman. He was restored as chairman and awarded $400,000 in damages (later reduced to $360,000).

The school appealed, but the federal appeals court upheld the verdict while removing the damages. The CUNY Institute for Research on the Diaspora in the Americas and Caribbean was created to do black research independent of Jeffries’ department. It was headed by Edmund W. Gordon, who had led the Black Studies Department before Jeffries was reinstated.

Academic freedom debate
The Jeffries case led to debate about tenure, academic freedom and free speech. He was sometimes compared to Michael Levin, a CUNY professor who outside of the classroom claimed that black people are inferior, and had recently won against the school in court.

One interpretation of the Jeffries case is that while a university cannot fire a professor for opinions and speech, they have more flexibility with a position like department chair. Another is that it allows public institutions to discipline employees in general for disruptive speech.

From the Wall Street Journal in 2013:

[Hakeem] said he responded as he normally does, acknowledging his deep ties to Prof. Jeffries but noting that he has carved his own path. …

Both Hakeem, 42, and Shavar, 38, remain close to Dr. Jeffries, though they said they disagree with many of his theories. Rep. Jeffries, whose father is Dr. Jeffries’s brother, said his focus always has been on solving urban problems, not on empowering one particular ethnic group.

Last year, the congressman was carried into office by a coalition that would have been hard to imagine when his uncle was in the public eye. In a primary, he easily defeated City Council Member Charles Barron, a black nationalist who has angered some of the same Jewish groups as Dr. Jeffries, and he won neighborhoods that were at opposite ends of racial tensions in the 1980s and early 1990s: African-American Bedford-Stuyvesant and white Howard Beach. He won areas with large orthodox Jewish populations, like Sea Gate. …

Rep. Jeffries has built close relationships with leaders of the large Jewish communities. “It’s really a contrast in character,” said Michael Miller, the chief executive of the Jewish Community Relations Council of New York, who clashed with Dr. Jeffries in the 1990s. By contrast, when Hakeem Jeffries was serving in the state Assembly, he impressed Mr. Miller when he joined him on a trip to Israel. …

The most significant experience the two had was in 1986, he said, when he and his brother, Hasan, joined a large group trip to Egypt led by Dr. Jeffries.

“That, in some ways, was a very meaningful trip,” Rep. Jeffries said. “It was the first and only time that I visited the continent of Africa.” …

I bet Rep. Jeffries has some fun ideas about who built the pyramids.

Hakeem is clearly an adroit politician, but he’s not that adroit.