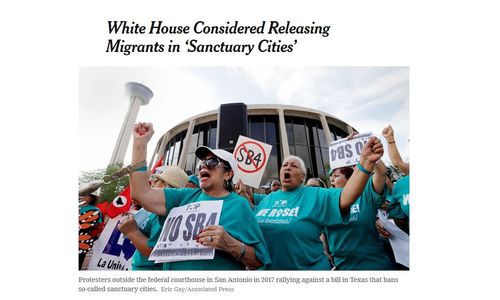 Ms. Davis suggested that migrants who had been apprehended and were slated to be released into border towns could instead be taken to one of several sanctuary cities, which limit how local law enforcement can cooperate with federal immigration officers.

The proponents of the idea inside the White House argued at the time that it would help with overcrowding at nonprofit shelters in border towns by transferring the migrants to cities that already embrace the idea of having more immigrants, one official said.

Once there, the migrants would be released onto the streets — potentially sending a message to the Democratic politicians who oppose Mr. Trump’s immigration agenda and his demands for a wall along the border with Mexico.

… Matthew Albence, the acting deputy director of ICE, objected to the idea, telling the White House that there would be liability issues if a migrant were injured during transport. He also raised concerns that the agency’s budget had not been appropriated for that purpose.

A spokeswoman for Speaker Nancy Pelosi, Democrat of California, who represents San Francisco, one of the most high-profile sanctuary cities in the country, condemned the idea on Thursday night.

“The extent of this administration’s cynicism and cruelty cannot be overstated,” said Ashley Etienne, a spokeswoman for Ms. Pelosi. “Using human beings — including little children — as pawns in their warped game to perpetuate fear and demonize immigrants is despicable, and in some cases, criminal.”

Ms. Etienne added, “The American people have resoundingly rejected this administration’s toxic anti-immigrant policies, and Democrats will continue to advance immigration policies that keep us safe and honor our values.”

Pelosi’s spokesperson went on to say that if undocumented migrants were released in the streets of San Francisco they might catch cholera from all the feces.