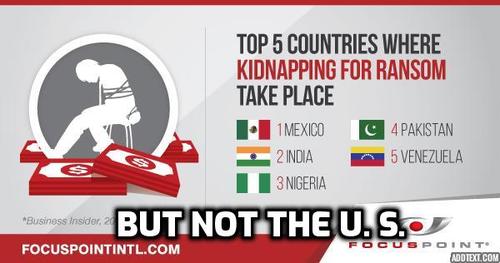 Why Did Kidnapping for Ransom Decline in U.S.?

Why is kidnapping for ransom so rare in the United States in the 21st Century?

To be precise, kidnappings in custody disputes and for sex crimes (or for other motivations in which the kidnapper wants the victim around) remain a problem in the U.S. But unlike in some Latin American countries, kidnapping for ransom is no longer in the news here in the U.S. For example, in Wikipedia’s list of noteworthy kidnappings, the last one in which the word “ransom” appears is 1991.

In the mid-20th century, however, famous families like Lindbergh, Hearst, and Getty suffered kidnappings.

In contrast, celebrity families in Latin America still get kidnapped. For example, last year everybody was praising Guillermo del Toro’s vaguely anti-Trump Oscar speech about how bad borders are. But I pointed out that Del Toro didn’t set foot within the borders of Mexico for 17 years after his father had been kidnapped and he borrowed a million dollars from James Cameron to pay the ransom. Del Toro moved to the lowest crime neighborhood in Southern California.

Interestingly, Del Toro’s dad got rich from winning the Mexican national lottery. Unlike most lottery winners, Del Toro Sr. then used his fortune to make a bigger fortune in business.