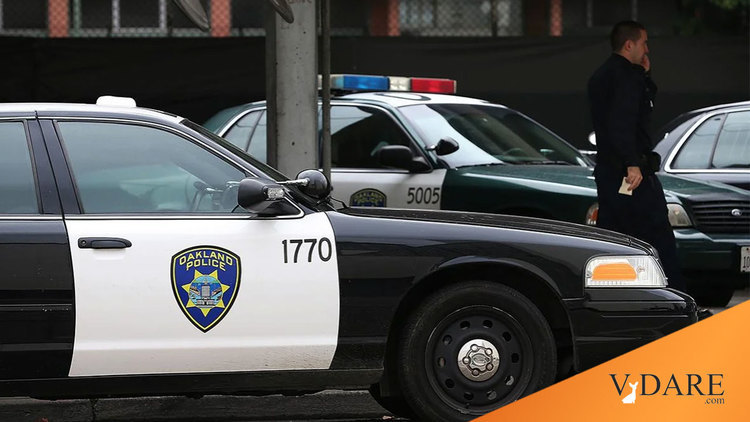 According to the all-knowing media, nationwide demonstrations against the Not Guilty verdict of George Zimmerman were “mostly peaceful.” Apparently Oakland is not worthy of attention, since the Saturday night riot there was moderately destructive.

The damage to the downtown Sears store, for example, was estimated at $50,000 and required special thug tools to smash its heavy-duty glass windows and doors. Businesses in downtown Oakland have to be reinforced against the periodic violent outbursts by the local underclass, which is particularly unruly given the city’s permissiveness toward it. The Oakland Occupy movement lasted longer than almost anywhere else and was extremely violent. 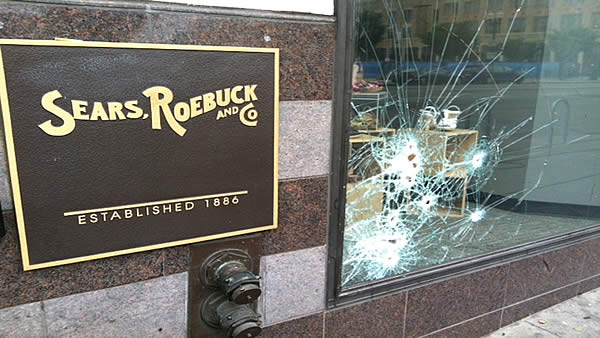 [. . .] Businesses across downtown Oakland were busy cleaning up after a demonstration late Saturday night turned to destruction.

All remnants of a violent protest Saturday night, when 100 people gathered after the verdict was read, marched through downtown Oakland and left destruction in their wake.

At Flora, on the corner of 19th and Telegraph, employees and patrons had to duck for cover under tables as the restaurant’s windows shattered around them.

“It was really scary for everyone,” witness Jessica Moncada said. “But the attitude, even with our staff, is that everyone understands why people are so angry. So there’s not a lot of animosity I guess towards the people, but one of our girls was pushed up against a wall, and so that’s not okay.”

Down the block, Sears has been a target during past demonstrations. On Saturday night, the business sustained the worst damage yet. Witnesses say the protesters used weights to smash nearly 30 windows and doors.

“I’m going to say pretty close to $50,000, around there,” said Manny Minjarez with San Lorenzo Glass. He says that’s the approximate cost to replace the windows that they’d already replaced before.

Despite all the damage, there were no arrests and no injuries. [. . .]

There were likely no arrests because Oakland was recently forced to pay out over $1 million to Oscar Grant protesters claiming police brutality. So the already violent city can expect to have even less police protection.

Being a business owner in downtown Oakland is a daunting endeavor, given the high crime and occasional mass anarchy.

One business hit was Dogwood, an upscale bar. Its Facebook page noted how anarchists had smashed all their windows on Saturday:

last night a group of black block idiots decided to smash our windows while drinking patrons sat inside. we will be closed today to clean but back open tomorrow, Monday. thanks for all the kind words. Oakland really sucks sometimes but it’s the city I love and wouldn’t change it’s heart, maybe just some of its spectators that like to cause mischief