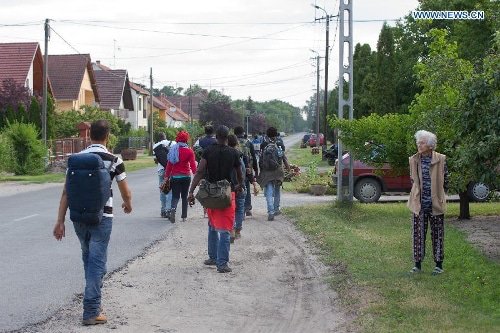 Above, a gang of illegal aliens enters a town in southern Hungary.

The PBS Newshour titled a Tuesday segment “Why Hungary is building a new ‘Iron Curtain’” — a historically ignorant characterization: the original Iron Curtain was built to keep people corralled within the Soviet Union’s communist empire following WWII. Today’s border fence being constructed by Hungary is to keep unfriendly people out. Big difference.

Many are Muslims looking for the “better life” Europe offers, or at least that is what they say to western reporters. The current chaos provides an easy entrance for jihadists to gain access to the millions of infidels they hope to murder.

The first people shown in the Newhour’s piece is a family from Congo in central Africa. Everyone on the planet knows that Europe is offering itself as a crash pad. Don’t Europe’s leaders know that Africa has a population of over a billion mostly poor people?

These cookie-cutter stories routinely avoid the fact that Europe has bad unemployment and the thousands of young men arriving from Africa and the Middle East won’t find jobs paying fat salaries. They will have plenty of time to hang out at the mosque though, where they will hear that the Muslims are victims and should pursue jihad against the meanie Europeans.

Politically correct leaders there seem too dishonest to admit they are creating future disorder. Do they really think they can admit many thousands of historic enemies from Islam and not see their cities become war zones? The danger now is bad enough, and it will only get worse.

One example: last fall Britain announced that authorities had foiled 40 terror plots since the 7/7 jihad attack in London. Why admit more enemies?

JUDY WOODRUFF: We return now to Europe, and another look at the continent’s growing migrant crisis.

In the former communist nation of Hungary, the government is racing to complete what opponents are calling a new Iron Curtain along its border with Serbia by the end of the month. Leaders there say they cannot cope anymore with the tens of thousands of migrants who are entering the country after arriving in Europe through the Greek islands.

MALCOLM BRABANT: This family is more than 3,000 miles away from home in Congo. After months on the road, they have just slipped across the frontier from Serbia and have been stopped by the Hungarian police.

The adults don’t want to be filmed, for fear of jeopardizing their chances of reaching France another thousand miles away. In this porous border region, the country lane is teeming with migrants on a relentless march to Northern Europe.

MAN: No, you are in Hungary.

MALCOLM BRABANT: You are in Hungary.

Where have you come from?

MALCOLM BRABANT: Nearby, a member of a right-wing vigilante group which claims to protect a local village stands guard over a group of Pakistanis who also just entered Hungary. Some fled for economic reasons, others because of persecution.

MAN: I wanted to marry some girl. The Muslim religion, we don’t have permission for it, so they kill her. So they don’t — they want to kill me, and now I’m running. Even my family want to kill me, my relatives, everybody, because we cross a religion. So, this is me running from there.

MALCOLM BRABANT: The migrants fear a repeat of violence they say was inflicted by police in Bulgaria.

MAN: They hit us here and here, here. And they take all money, SIM cards, mobile. Everything, they take from us.

MALCOLM BRABANT: But the vigilante lets them go. The authorities estimate as many as 2,000 people are crossing illegally into Hungary every day. Although most have no intention of remaining in the country, their sheer numbers intimidate some on isolated farms.

The owner of this small holding complains of aggressive migrants climbing over her fence late at night.

HALAZS JOZSEPHNE, Farmer (through interpreter): We have got no idea what these people are like. I’m afraid of them because I live on my own.

MALCOLM BRABANT: Her neighbor shows off a gas spray he keeps for protection.

In this hostile climate, the Hungarian army is on the move, building a 110-mile-long fence along the border with Serbia. Opponents call it Europe’s new Iron Curtain. Despite being one of the poorer members of the European Union, the government here is allocating more than $80 million to the project, much to the approval of local ultranationalist mayor Laszlo Toroczkai.

LASZLO TOROCZKAI, Mayor, Asotthalom, Hungary: They destroy all their documents before they arrive to the Hungarian side. They don’t want to show their identity. We never know who is that migrant. Maybe there is a few terrorists in the groups.

MALCOLM BRABANT: So far this year, 80,000 migrants have crossed into Hungary. This group is waiting for a bus chartered by the Hungarian authorities that will take them part of the way toward refugee camps.

Julia Evan is a law officer with Hungary’s Helsinki Committee, which advocates on behalf of migrants and helps them with their applications for political asylum.

JULIA IVAN, Attorney, Helsinki Committee for Human Rights: Building a fence will not be an effective tool to stop people from coming, to stop refugees from fleeing war zones. It’s more seen as a political action, as a propaganda measure by the government to reinforce their popularity or to stop the decrease of their popularity amongst Hungarian voters.

MALCOLM BRABANT: One hundred miles from the border in the capital, Budapest, the government argues that other walls and fences around the world have been effective and dismisses accusations that it’s being erected in order to win support inside Hungary.

A government spokesman, Zoltan Kovacs, says the influx left them with no alternative.

ZOLTAN KOVACS, International Spokesperson, Hunary: It’s an unstoppable flood. It’s going to speed up by the end of the year. As a matter of fact, the Hungarian border again is the European border. So, when we are protecting the borders of Hungary, we are — at the same time are protecting Europe.

MALCOLM BRABANT: Socialist opposition parties have accused the government from isolating Hungary from its allies and lacking in humanity, but Marton Gyongyosi, a leading lawmaker with the nationalist Jobbik Party, believes the fence alone is not enough and that additional protection measures are needed.

MARTON GYONGYOSI, Jobbik Party: The migration that is hitting the borders of the European Union is absolutely unbearable. From the southern direction or from the eastern direction, we’re having a flow of migration which is going to come to a situation whereby Europe is going to collapse, given the demographic trends in Europe, given the economic and the financial situation in Europe, and of course, given also this migration. Europe is going to disintegrate if we don’t get down to business with regard to the issue of migration.

MALCOLM BRABANT: It’s long been the dream of European federalists to have a union free of border controls, to facilitate the uninhibited movement of people and goods.

But the scale of the migrant crisis has caused many politicians to question the wisdom of having eradicated passport checks. This fence may be on the outer reaches of the European Union, but will it encourage other member states the start reinstituting border controls inside? And what’s clear is that the concept of a united states of Europe is being undermined by this human tide.

In Serbia, another transit country on the long refugee trail north, the decision to build a fence has been met with alarm. Serbia says it can’t afford to pay, to accommodate and clean up after the migrants, and they have asked the financially strapped U.N. Refugee Agency to cover its costs.

But Mihaily Bimbo, a local mayor, claims his municipality will run out of money soon and fears the fence will exacerbate his problems.

MIHAILY BIMBO, Mayor, Kanjiža, Serbia (through interpreter): It’s the sovereign right of any country to build a fence on its territory, but the worst thing is they could be stuck here for a longer period of time, and we don’t know what to do with them.

MALCOLM BRABANT: Serbia is reported to be speeding up efforts to help the refugees on their way. They arrived in the southern Hungarian town of Szeged, where they get a chance the clean up. Very basic facilities provided by volunteers sympathetic to the migrants’ plight and paid for by donations do help.

MAN: We all remember what the term Iron Curtain meant. Like, my parents’ generation, they have very sad memories about building walls or fences between nations in Europe. They were all very happy in 1990, when this so-called Iron Curtain was removed. So I think it’s very, let’s say, anachronistic to build fences or walls between countries.

MALCOLM BRABANT: After a brief stay in Szeged, they’re sent by train the Budapest. But instead of being taken to a refugee camp, many of them end up camping out in the subways beneath the main railway station.

Andras Lederer, one of the volunteers, is angry that the government is not doing more to help.

ANDRAS LEDERER, Volunteer: I think it’s both outrageous and extremely inhuman. It’s very cynical at the same time. What they try to do now is boost their popularity by pointing to these people as the common enemy. The reason why these people are here is simply because the government refuses to treat them as human beings.

MALCOLM BRABANT: There’s less squalor, but undiminished despair in a Budapest park where a 20-year-old Asmal Khan from Afghanistan is resting after walking through Iran and part of Turkey.

He’s helping a young mother and her child on their journey. They have become something of a surrogate family after, he says, Islamists killed his parents, brother and sister and burned his home.

Where do you want to go?

MAN: I don’t know. I want to go to a place that have peace and they respect me.

MALCOLM BRABANT: But where?

MALCOLM BRABANT: Every migrant carries a personal tale of hardship, but many Europeans are becoming selectively deaf as the numbers grow and their governments are divided about how to respond.

In the meantime, the migrants are racing to beat the fence before it is completed.

For the PBS NewsHour, I’m Malcolm Brabant on the Hungarian-Serbian border.