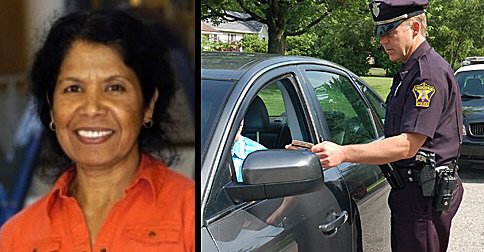 Someone might want to check Minati Roychoudhuri’s papers, because she looks to be more like 42, than 32 (Credit: Capital Community College)

Notice that the academic could not follow the officer’s simplest instructions. He asked for her registration, but she gave him her insurance, and for the wrong car, to boot.

Minati Roychoudhuri violated her victim’s civil rights. She had to be trying to get him fired. (By the way, don’t expect to hear her employers firing her, based just on the charges, as police chiefs increasingly do, or anyone screaming for her head professionally.)

The cop had to be white. Roychoudhuri was following the hoax script that racial socialist academics promote constantly. My hunch is that she not only wanted to get him fired, but that she was hoping to get a promotion, based on her victimhood, which is the basis of her entire career. She even emphasized that she talks about “diversity” in her classes. But, of course. What else would she have to talk about?

And I guarantee you that she will go back to work without any contrition, in the fall.

I’ve had the misfortune of working with plenty of people like her.

If more people were prosecuted for these hoaxes, obviously their prevalence would be severely reduced. The problem is that one aspect of affirmative action justice is that prosecutors are encouraging the hoaxes. As for the currently popular notion that videotape is our savior, the media typically ignore, or themselves falsify what videotapes show, as we’ve seen since the Rodney King case in 1991.

Thus, we’ll see an endless procession of such hoaxes.

I checked Google Scholar, to get a look at scholarly works by or citing Roychoudhuri, but there was nothing (see here, and here.

Her only presence in books is a generic thank you from a crony in a list of acknowledgements to an English composition textbook. Other citations of an “M. Roychoudhuri” or “Roychoudhuri, M.” are to a 1940s scholar of Islam, and a physicist from 40 years ago.

WETHERSFIELD– A professor at a local community college has been arrested after allegedly claiming an officer racially profiled her, when he didn’t.

On May 9, Minati Roychoudhuri, 32, of Storrs, was driving near exit 85 on Route 15 when she was pulled over. She was cited for failure to drive in the established lane.

A month later, on June 8, she sent the following letter to the Commissioner of Public Safety:

I was traveling to Wethersfield on Route 15/5 to attend a meeting 9th May. I was on the left lane on route 15 and had to take exit 85. After the Brainard Airport exit, and after the merging lane ended, I signaled and went to the right lane to take exit 85. An unmarked police car with flashing light stopped me on the ramp after I had taken the exit. The policeman asked me if I could speak English and if I knew why he had stopped me. I said, “yes” to speaking English and “no” to why he had stopped me. He then asked me for my driver’s license and registration. He returned with an envelope and said that I could simply mail in the infraction.

The officer did not give me any reason as to why had stopped me. His asking if I could speak English shows that he had racially profiled me and was not able to give me a concrete reason for stopping me. Further, the officer had checked “Hispanic” in the race category in the infraction ticket. I am a Professor in English at Capital Community College, I teach about diversity and the negative impact of racial profiling, I have now become a target of the same insidious behavior! It is easy to connect the dots with the nationwide racial profiling which has led to serious consequences. I request that my infraction charges be dropped and action be taken against the officer. I have talked with the Senator and Legislator of my constituency regarding this matter and I am sending a copy of this letter to them as well.

Most State Police cruisers, including the one that stopped Roychoudhuri, have video and audio recorders to record all motor vehicle stops and other interactions.

Here is a transcript of the conversation between Roychoudhuri and the officer:

Officer: Hi ma’am, do you know why I’m stopping you today?

Officer: OK. There’s that big gore area with white lines painted across it and you cut in front of it, in front of me, thinking it’s a lane or something. You have to wait until it’s a dotted white line. License and registration.

(She handed him insurance, so he requested the registration again, which she gave him)

Officer: Thank you. This is for your Subaru car.

Roychoudhuri: This is my Subaru car.

Officer: Is this a station wagon, color green? The plate doesn’t match what’s on there.

Roychoudhuri: [Inaudible]…I thought that was my [inaudible]

Officer: I’ll run the plate and see what it comes back with.

Roychoudhuri: This is the [inaudible] that I have.

Officer: Ma’am. So I wrote you the infraction for that improper lane change that you did.

Roychoudhuri: Please, you know, I probably crossed over there, and that’s why I did it.

Roychoudhuri: Obviously I did that.

Roychoudhuri: My [inaudible] is absolutely clean.

Officer: Ok. So I wrote you an infraction for that improper lane change that you did.

Officer: The answer date is on the front of it and the instructions are on the back of it.

Officer: It’s a mail in infraction. All you have to do is mail in, either a check or money order, and mail it in.

The Internal Affairs investigation reviewed that audio, and concluded the officer never asked Roychoudhuri if she spoke English and that he clearly explained to Roychoudhuri why she was pulled over, to the point that she offers an explanation as to why she made the improper turn.

When interviewed in person in regards to her letter on June 15, Roychoudhuri repeated the same claims of racial profiling and that the officer did not explain why she was stopped, and then she signed a statement that it is a crime for her to make any claims that she doesn’t believe to be true in an effort to mislead a public servant.

At the interview, Roychoudhuri also said to the investigator she hates to think she was stopped due to her race [I’ll just bet she does!], “But what should I presume? I hate [ha, ha, ha!] to say this in academia, but I’m in academia and teach [lie] about diversity all the time.”

Roychoudhuri was subsequently arrested for giving a false statement in the second degree.