Like white on rice, fears of backlash gush from Muslims whenever some horrific act of jihad occurs. The awful butchery from Kenya has sent the Sons of Allah into complaint mode, trying to portray themselves as victims when no lynch mobs have appeared.

A couple years ago I blogged about the problems stemming from Somalis residing in the Kenya capital, where they were viewed with suspicion by the homies who rightly feared infiltration by the barbaric al Shabaab from Somalia next door. (See Nairobi’s Little Mogadishu Creates Unease among Kenyans.)

Like Minneapolis, Nairobi has its own “Little Mogadishu” (pictured below) and the foreigners there complain of “Somali-phobia” from the Kenyans, the majority of whom are Christians. (In a 2007 Pew poll, 83 percent of Kenyans agreed with the statement “We should further restrict and control immigration.”) 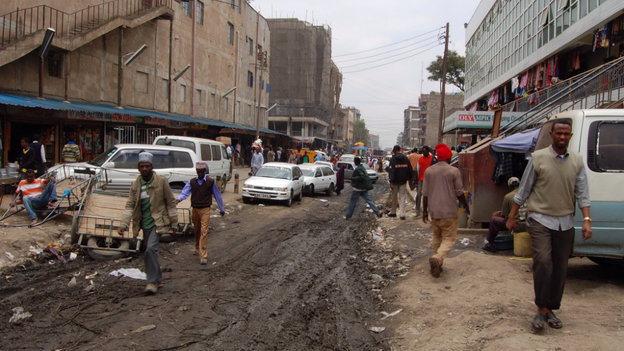 Closer to home, terror expert Erick Stakelbeck pointed out the large number of hostile Somalis who reside in Minneapolis, which is not far from the Mall of America, the largest shopping center in the country.

In Nairobi, the pile of bodies (all non-Muslims by design of the killers) is still being sorted out, but local Muslims are worried only about how the jihadist murder of more than 60 innocents will affect the Somalis.

Hopefully the Kenyan authorities will use the attack to at least do some roundups and deport the illegal aliens and Shabaabers.

In the shabby “Little Mogadishu” quarter of Kenya’s capital, Somalis feared the militant attack on a Nairobi shopping mall could trigger a violent backlash against them.

Islamist group al Shabaab said it carried out the raid on the Westgate center, that killed at least 59 people, in revenge for Kenya’s military campaign against its fighters in Somalia.

In the congested Eastleigh neighborhood, memories were still fresh of the mobs who targeted homes and shops in November after a suspected al Shabaab attack on a minibus killed nine.

“A mob of youths can … attack us like last time,” said Mohamed Warsame, sitting next to a stall selling “khat” leaves, which are chewed as a stimulant across the Horn of Africa.

The elderly man said he expected the police would at least mount more raids to round up illegal immigrants and suspected militants.

Groups of Somali men talked in hushed tones and at one electronics shop, the owner changed channel to switch from the live coverage of the mall assault drama to a tennis match.

“I don’t think those people who attacked the mall are true Muslims. Islam does not support killing of the innocent. Anyone who kills an innocent person has killed humanity,” said a woman in her 40s who would only gave her first name, Zuleka.

She said she had lived in Kenya for more than a decade, one of thousands of ethnic Somalis who have fled years of war and turmoil to seek a better life in east Africa’s biggest economy.

A shoe seller who declined to give his name said the Westgate mall raiders were bringing Somalia’s war to Kenya. “The reason we’re here is because of such people who have invaded our country (Somalia),” he told Reuters.

There are also concerns Saturday’s attack will badly dent tourism and investment in Kenya.

“This will be bad for business here. Some of the shops here will have to close,” said Farrah Abdi, an 19-year-old ethnic Somali and a mobile phone shop attendant in Eastleigh. He said he was born there and had never been to Somalia.

“I consider myself more of a Kenyan … My whole life is here.”

The Supreme Council of Kenya Muslims condemned the raid on the mall as a “heinous terror attack” and called for Kenyans not to divide along sectarian lines.

Somalia’s ambassador, Mohamed Ali Nur, appealed to Kenyans not to target Somalis. He told Citizen TV he was about to attend a funeral of the wife of a Somali killed in the mall attack.

“Here in Kenya we have Somali citizens who live here, as refugees, business people, students. We do not want them to be harmed in anyway … I want to repeat that Kenya and Somalia are together in this, we should not be separated,” he said.

“WE HAVE SEEN THE DEVIL”
Muslims make up barely 11 percent of Kenya’s 40-million strong population which is made up of a patchwork of ethnic groups.

But Islam has long been the predominant religion along its eastern coast – and there have been sporadic outbursts of sectarian violence in the port city of Mombasa.

There have been attacks against Christian churches and police, some blamed on an outlawed coastal group, the Mombasa Republican Council (MRC), which wants to secede from Kenya.

Coastal Muslims complain that they have lost land and jobs to settlers from inland, while seeing little of the wealth generated by tourism on their beaches and traffic at their port, which serves most of east and central Africa.

“This is an attempt to drive a wedge between Muslims and other religious groups in Kenya, but we want to tell those terrorists that we are brighter and aware of their intentions, and that we will not succumb,” Mombasa senator Hassan Omar said.

Anglican Bishop Julius Kalu, speaking during a Sunday service in Mombasa, called for unity and prayers.

“We have seen the devil in his true colors. Our faith as Kenyans has been tested,” he said. “Let us unite as a Kenyan family in this grief, regardless of our religious affiliations.”