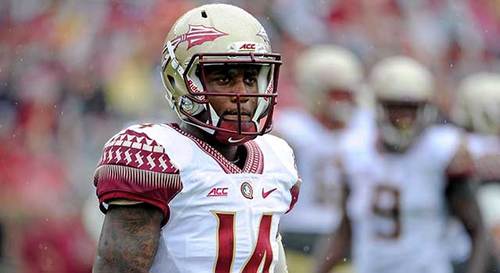 Black FSU QB De'Andre Johnson Punched A White Woman In The Face In A Bar; Claims She Called Him An Epithet

Here's another fine fellow who might pass for Barack Obama's son. It's Florida State Seminoles quarterback De'Andre Johnson. Note that his stats are missing from ESPN.com, by the way. But forget for a moment the shocking violence of Johnson's brutal assault on a white women in a bar. That's par for the course for black men; all whites are fair game. As is Johnson's defense: The girl called him a n*gger. She's a racist, and deserved what could have been a killing punch considering his size and hers.

More disturbing than  Johnson's attack, and the flimsy excuse for it, is this: Not a single man in that bar, black or white, defended that poor girl.

Nor did anyone come to the defense of Kevin Sutherland, as Jasper Spires was beating and stabbing him to death on the D.C. metro.

Forget about the white cops, prosecutors and judges who let obviously guilty blacks — particularly when they commit inter-racial crimes — off the hook.

Why won't whites and law-abiding blacks try to stop these crimes, or at least help the victims?