It is depressing to see Christians being killed and driven out of historic lands by jihadist murderers. The church has had a long history in the Middle East, including places like Turkey and Syria where the apostles traveled and spread the gospel.

In a 2009 Sixty Minutes interview, the Patriarch of Orthodox Christians said he lived as a second-class citizen in Muslim Turkey where the church is treated with extreme disrespect:

At the turn of the last century there were nearly 2 million Orthodox Christians in Turkey; 1.5 million were expelled in 1923, and another 150,000 left after violent anti-Christian riots in Istanbul in 1955.

[Guide Sevim] Karabiyik told us, much to our surprise, that the four gospels were written in Turkey and that three of the apostles spread the word there.

Even Jesus’ birthplace, Bethlehem, is now a Muslim town with only about 15 percent Christians, although Muslims hope some Christians remain so tourists won’t be uncomfortable.

Last August, the Muslim Brotherhood attacked Christians in Egypt, killing hundreds and torching dozens of churches, like the Archangel Michael Church near Cairo shown below. 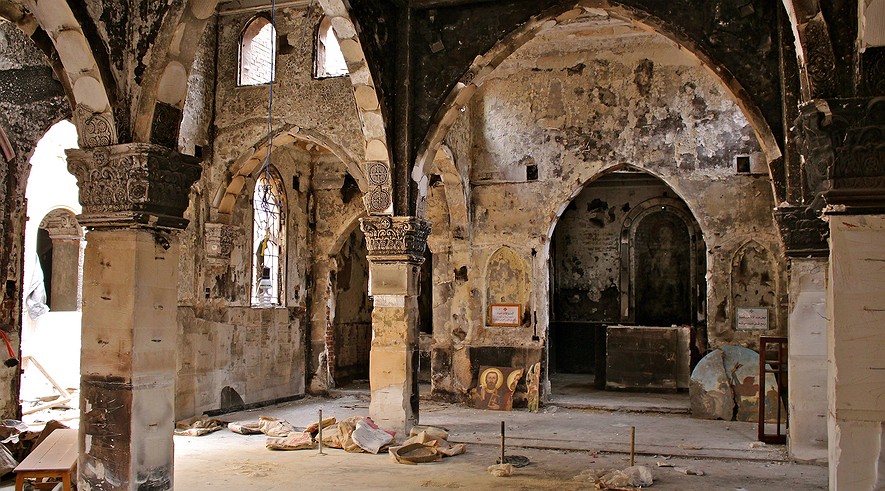 The video mentions the WSJ opinion piece written by Israel’s Ambassador to the UN, which follows:

The situation in Egypt and Turkey illustrates the history of Islam: infidels are murdered or forced to leave if they don’t convert to Islam. Europe is next.

Muslim-majority nations are doing to followers of Jesus what they did to the Jews.

This week, as Jews celebrate the Passover holiday, they are commemorating the Bible’s Exodus story describing a series of plagues inflicted on ancient Egypt that freed the Israelites, allowing them to make their way to the Holy Land. But over the past century, another exodus, driven by a plague of persecution, has swept across the Middle East and is emptying the region of its Christian population. The persecution is especially virulent today.

The Middle East may be the birthplace of three monotheistic religions, but some Arab nations appear bent on making it the burial ground for one of them. For 2,000 years, Christian communities dotted the region, enriching the Arab world with literature, culture and commerce. At the turn of the 20th century, Christians made up 26% of the Middle East’s population. Today, that figure has dwindled to less than 10%. Intolerant and extremist governments are driving away the Christian communities that have lived in the Middle East since their faith was born.

In the rubble of Syrian cities like Aleppo and Damascus, Christians who refused to convert to Islam have been kidnapped, shot and beheaded by Islamist opposition fighters. In Egypt, mobs of Muslim Brotherhood members burn Coptic Christian churches in the same way they once obliterated Jewish synagogues. And in Iraq, terrorists deliberately target Christian worshippers. This past Christmas, 26 people were killed when a bomb ripped through a crowd of worshipers leaving a church in Baghdad’s southern Dora neighborhood.

Christians are losing their lives, liberties, businesses and their houses of worship across the Middle East. It is little wonder that native Christians have sought refuge in neighboring countries—yet in many cases they find themselves equally unwelcome. Over the past 10 years, nearly two-thirds of Iraq’s 1.5 million Christians have been driven from their homes. Many settled in Syria before once again becoming victims of unrelenting persecution. Syria’s Christian population has dropped from 30% in the 1920s to less than 10% today.

In January, a report by the nondenominational Christian nonprofit organization Open Doors documented the 10 most oppressive countries for Christians; nine were Muslim-majority states noted for Islamic extremism, and the 10th was North Korea. These tyrannical regimes uphold archaic blasphemy and defamation-of-religion laws under the guise of protecting religious expression. In truth, these measures amount to systematic repression of non-Islamic groups.

Last year in Saudi Arabia, two men were prosecuted for the “crime” of converting a woman to Christianity and helping her flee the Islamic kingdom. According to the Saudi Gazette, one of the men, a Lebanese, was sentenced to six years in prison and 300 lashes, and the other man, a Saudi, was sentenced to two years and 200 lashes. Those are relatively mild sentences in Saudi Arabia, where conversion to another religion is punishable by death.

The “justice system” in other Islamic nations is not particularly just for Arab citizens, but it is uniquely oppressive for Christians. Radical Islamists in the northern Syrian city of Raqqa are using an ancient law called the “dhimmi pact” to extort local Christians. The community is faced with a grim choice: pay a tax and submit to a list of religious restrictions or “face the sword.”

In the Islamic Republic of Iran, expressions of political dissent are regarded as acts of blasphemy. Last summer, three Iranian Christians caught selling Bibles were found guilty of “crimes against state security” and sentenced to 10 years in prison. They were relatively lucky. The regime has executed dozens of people for the so-called crimes of “waging war against God” and “spreading corruption on Earth.”

The scene unfolding in the Middle East is ominously familiar. At the end of World War II, almost one million Jews lived in Arab lands. The creation of Israel in 1948 precipitated an invasion of five Arab armies. When they were unable to annihilate the newborn state militarily, Arab leaders launched a campaign of terror and expulsion that decimated their ancient Jewish communities. They succeeded in purging 800,000 Jews from their lands.

Today, Israel, which I represent at the United Nations, is the only country in the Middle East with a growing Christian population. Its Christian community has increased from 34,000 in 1948 to 140,000 today, in large measure because of the freedoms Christians are afforded.

From courtrooms to classrooms and from the chambers of Parliament to chambers of commerce, Israeli Christians are leaders in every field and discipline. Salim Joubran, a Christian Arab Israeli, has served as a Supreme Court justice since 2003 and Makram Khoury is one of the best-known actors in Israel and the youngest artist to win the Israel Prize, our highest civic honor.

Father Gabriel Nadaf, a Greek Orthodox priest living in Israel, recently told me: “Human rights are not something to be taken for granted. Christians in much of the Middle East have been slaughtered and persecuted for their faith, but here in Israel they are protected.”

Nations that trample on the rights of their people sow the seeds of instability and violence. The uprisings that have erupted across the Middle East are evidence that the region’s Holy Grail has become the pursuit of freedom, democracy and equality. Let us hope that this quest bears fruit before it is too late for the region’s remaining Christians.

Mr. Prosor is Israel’s ambassador to the United Nations.