Taxpayer-supported state colleges are supposed to provide a higher education at a reasonable cost to the young people who are residents. That’s why in-state students get lower subsidized tuition than outsiders.

But lately in California, not so much. The state’s university system has forgotten its mission to educate California kids in part because it is low on funds and likes the full-freight tuition paid by out-of-staters and foreign students (even as illegal alien students are subsidized).

As a result of University of California accepting fewer state students by design, officials said they expect that 13% of all undergraduates will be from outside California in the fall, up from 12% this year and just 5% four years ago. 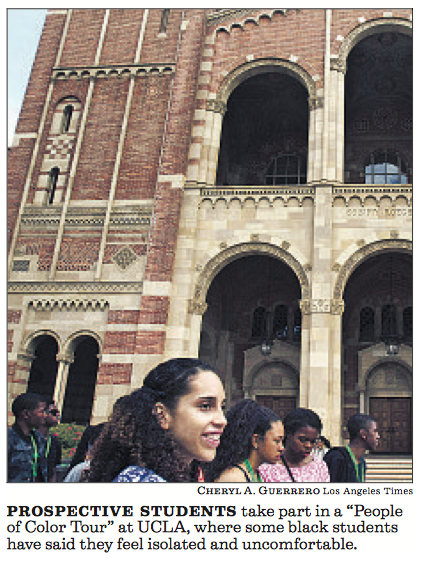 Another priority of university bureaucrats is diversity, as suggested by the snap from Saturday’s LA Times front page (pictured) connected to the article “California students feel UC admission squeeze”.

The AP story headlines that more Hispanics than whites were admitted for next fall, with the only explanation being that there are now more of them in the state. In 1996 California voters rejected affirmative action via Prop 209, so college admissions are not supposed to be race based.

Does anyone think that Hispanics, a tribe which is famously uninterested in scholarly pursuits, have suddenly taken to books and studying? Not bloody likely.

SAN FRANCISCO (CBS / AP) — More Latino than white students in California have been offered admission to the state’s premier public universities for the first time, officials said Friday, a milestone that reflects the diverse racial makeup of a state where Latino children represent a majority of students in public schools.

Preliminary admissions data show that 17,589 Latino students have been accepted as freshmen at one of the University of California’s nine undergraduate campuses for the fall, or 29 percent of all 61,120 in-state applicants who were offered a spot. That compares to 16,378 white residents, who made up 27 percent of the admitted applicants.

“It is really encouraging and emphasizes that Latinos want to go to college,” Dow said. “Latino families, Latino students understand the value of an education and are doing what they need to do to be competitive and eligible for the most rigorous system in the state.”

University officials said that competition to get into a UC school remained stiff, a situation they tried to address by making room for more students. A record 86,865 students from California, out-of-state and abroad were accepted, or 58 percent of all 148,688 applicants. By comparison, the system had a 68 percent acceptance rate for Fall 2011. The new numbers are a sign of how much harder winning a spot has become.

Of the ones who got lucky in the admissions lottery this year, 25,745, or 30 percent of the accepted freshmen, are from out-of-state or are international students. The percentage of UC students who are not state residents has risen steadily in recent years as officials have tried to offset cuts in state funding with the higher tuition nonresidents pay.

Every campus except the two most prestigious — Berkeley and UCLA, which admitted fewer students than last year — accepted more international or out-of-state students for the fall.

So while the number of students admitted system-wide for the fall rose overall by 4,015 over last year, 2,984 of those offers went to non-Californians.

“I know there have been some concerns that campuses have increased the number of out-of-state and international students (and) are somehow displacing California students,” said Stephen Handel, UC’s associate vice president for undergraduate admissions. “And that’s not true. We admit as many California applicants as we receive funding for from the state.”

Even though the system has stepped up recruitment of students from outside the state, 61,120 Californians — 1,031 more than last year — still gained admission to a UC school. Most of the growth, however, was limited to just the three campuses that accepted more applicants overall: San Diego, Riverside and Santa Cruz.