Olson: If SCOTUS Will Not Bring Federal Judges Under Control, It Will Be Congress' Responsibility

Earlier today, we tweeted surprise that so many people, misled by MSM headlines, didn't realize that SCOTUS' declining to hear the Trump Administration's DACA appeal was not decisive—it just means the appeal has to work its way up through the usual lower courts, of course wasting time and enriching lawyers in the process.

But although SCOTUS' decision was not surprising, it was not heroic. Patriot public interest lawyer William J. Olson, whose Judicial Imperialism Vs. America: Report From The Immigration Front co-authored with Herb Titus we recently posted and who submitted an amicus brief in support of the Administration, has issued this statement (emphases added):

The Court's decision this morning to allow District Judge Alsup's nationwide injunction to stay in place is deeply disappointing.

Many lower federal courts appear to have wrongfully usurped power to stop the Trump Administration from changing the policies of the Obama Administration. These nationwide injunctions demonstrate hostility not just to President Trump, but to the people who elected him for the express purpose of changing those policies. The Court had the opportunity today to restore a semblance of order to the lower courts, but choose to wait.

Although the court's ruling was procedural only, the government's petition and our amicus brief demonstrated that the injunction was based on a bogus rationale as to why the Trump Administration changed policy positions on DACA. And, it was based on the false notion that the judges alone make law and enforce the Constitution. 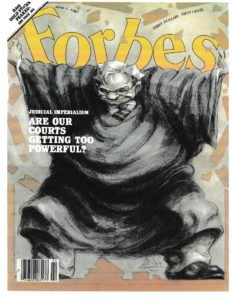 If the Supreme Court will not act decisively to bring these lower federal judges under control, it will be the responsibility of Congress to restrict their powers to override the results of a national President election.

We are now in an Age Of Kritarchy —rule by judges—and the only answer is impeachment. (I hasten to say this is my view, not Olson's).

I must humbly say I predicted this crisis in a Forbes Magazine story (cover pictured right) over thirty years ago.

This is why I'm rich and famous.