The big Muslim news on Friday was the beheading murder in Oklahoma of a worker in a food processing plant by a recent Muslim convert, Alton Nolen. He attacked a second woman with a knife, but was fortunately stopped by man with a gun, Mark Vaughan, a reserve sheriff’s deputy and the company’s chief operating officer. 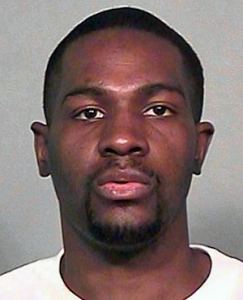 Nolen (pictured) was not killed from being shot and is expected to survive. He was recently fired from his job at the Vaughan Foods plant where the murder occurred, and where he also pestered coworkers to convert to Islam. He has a long rap sheet, heavy on drugs and including an assault on a police officer.

Here are a few thoughts: Nolen was already a violent man, but becoming a Muslim would give license to murder infidels. He offered Islam as instructed by the Koran to his coworkers but they refused, so they got the knife — the old “Convert or Die” routine, discussed at length in Islamic scriptures.

It’s also common for Muslims to attack women and children in typical Religion of Bullies fashion. They never start a fair fight and prefer to gang up on healthy male opponents, for example when an American college student was beaten up by several Muslims in London for drinking beer.

Nolen is a born-here American citizen, but he converted to Islam when he was in prison. Islamic religious outreach does well in American prisons with a captive audience and the Muslim message of approved violence. Prisons welcome religious workers of all sorts, so jihad-inclined immigrants and other Muslims can make efficient use of the system to recruit new choppers.

OKLAHOMA CITY (AP) — A man fired from an Oklahoma food processing plant beheaded a woman with a knife and was attacking another worker when he was shot and wounded by a company official, police said Friday.

Moore Police Sgt. Jeremy Lewis said police are waiting until Alton Nolen, 30, is conscious to arrest him in Thursday’s attack and have asked the FBI to help investigate after co-workers at Vaughan Foods in the south Oklahoma City suburb told authorities that he recently started trying to convert several employees to Islam.

“Yes, she was beheaded,” Lewis told The Associated Press before a Friday news conference.

Lewis said Nolen then stabbed Traci Johnson, 43, a number of times before Mark Vaughan, a reserve sheriff’s deputy and the company’s chief operating officer, shot him.

“This was not going to stop if he didn’t stop it. It could have gotten a lot worse,” Lewis said. “The threat had already stopped once we arrived.”

Lewis said Moore police have asked the FBI to look into the man’s background because of the nature of the attack, which follows a series of videotaped beheadings by Islamic State militants.

In a statement, FBI Special Agent in Charge James E. Finch said the motive for the attack has not been determined but that there is no reason to believe there is a threat to anyone else.

Johnson and the suspect were hospitalized and in stable condition Friday, Lewis said. Nolen had not yet been charged and Lewsi said he didn’t know what charges the suspect would face.

Oklahoma Department of Corrections records say Nolen has served time in prison and is on probation for assault and battery on a police officer. He also was convicted of cocaine possession with intent to distribute in 2011.

Corrections records show Nolen has what appear to be religious tattoos, including one referencing Jesus and one in Arabic that means “peace be with you.”

Lewis said Nolen had been fired in a building that houses the company’s human resources office, then immediately drove to the entrance of the business. Lewis said he didn’t know why the man was fired.

A Vaughan spokeswoman said the company was “shocked and deeply saddened” by the attack.