Judge Jeanine Pirro opened her Fox show with a fine segment about the administration’s pre-sequester release of 2,000 criminal aliens, with more to come. She emphasized, “The first order of government is the protection of its citizens.” But that duty is not followed by this administration.

The first thing the Obama crew did with the excuse of reduced funding was to fling open the prison doors, even when the DHS has billions in spare money in reserve. How many preventable crimes against Americans have been set in motion by this rash act against public safety?

Judge Jeanine interviewed Congressman Steve King and Pinal County Sheriff Paul Babeu. The sheriff reported the dangerous nature of many of the released foreigners, that they are convicted of crimes, not just accused. The freed criminals include drug smugglers, cartel members, weapons violators, drug dealers, child molesters, plus persons found guilty of assault and manslaughter. Potential ICE whistleblowers who want to tell the truth about what’s going on have been threatened with severe retaliation and firing. 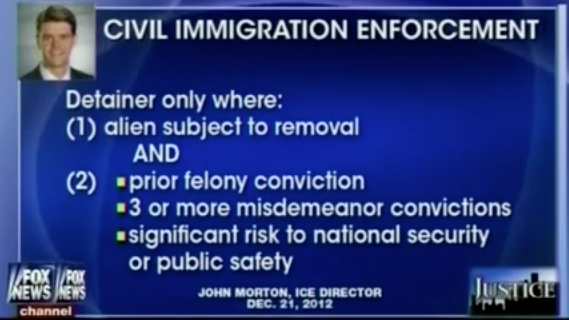 Whatever happened to the presumption of deportation of illegal aliens who were in custody? Tough enforcement was Congresswoman Barbara Jordan’s prescription:

“Credibility in immigration policy can be summed up in one sentence: Those who should get in, get in; those who should be kept out, are kept out; and those who should not be here will be required to leave…For the system to be credible, people actually have to be deported at the end of the process.”
(Barbara Jordan, February 24, 1995 Testimony to House Immigration Subcommittee)