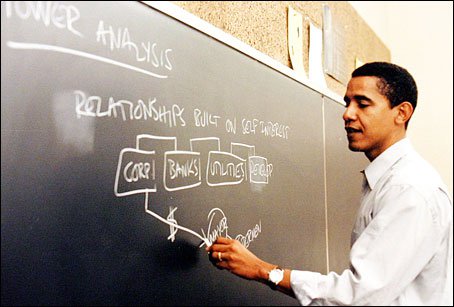 A well-pleased Obama in his natural element: lecturing on Power Relationships at an Alinskyite confab

One obvious aspect of the President’s personality is how academic he is. He’d be a lot happier if the Oval Office came with a blackboard at which he could give lectures.

To non-academic audiences, however, the President can be less than galvanizing. From USA Today:

President Barack Obama made a rare appearance on the campaign trail on Sunday with a rally to support the Democratic candidate for governor in Maryland, but early departures of crowd members while he spoke underscored his continuing unpopularity.

With approval levels hovering around record lows, Obama has spent most of his campaign-related efforts this year raising money for struggling Democrats, who risk losing control of the U.S. Senate in the Nov. 4 midterm election.

Most candidates from his party have been wary of appearing with him during their election races because of his sagging popularity.

“You’ve got to vote,” Obama repeated over and over at a rally for Brown in Upper Marlboro, Maryland, near Washington.

Obama’s academic orientation is a little bit puzzling in nature-nurture terms because, while his mother eventually was granted a Ph.D. in anthropology, his Kansas grandparents, who mostly raised him, weren’t college graduates. They got out of high school near the beginning of WWII and found war work and got married. After the war, Stanley tried taking classes at UC Berkeley, but quickly dropped out.

But the President’s Jayhawk grandparents each had a sibling who earned a Ph.D., which was pretty rare in the middle of the 20th Century. Stanley’s brother Ralph Dunham got a Ph.D. at Berkeley and mostly worked for the federal government (generally not in intriguing agencies – I checked). Fittingly, the name “Ralph” had earlier entered the family line as a tribute to Ralph Waldo Emerson, the pluperfect post-Puritan.

A more obscure figure was the President’s grandmother’s sister Margaret Arlene Payne, who died this year at age 87. She earned a doctorate from the U. of Chicago and was a professor at the U. of Kansas and the U. of North Carolina in some field like nutrition. Perhaps one reason for her low profile is that she maintained what Henry James called a “Boston marriage” with another lady professor for several decades. (You can’t get much WASPier than that.)

The great-aunt’s Chicago Ph.D. helps explain the U. of Chicago connection that runs throughout the Payne side of the family: his grandmother’s brother Charles earned a master’s in engineering at U. of Chicago after the War, then spent his career on campus as a library manager. The President’s mother is said to have been accepted at U. of Chicago at age 15 under the famous accelerated education system (that produced such graduates as James D. Watson, Philip Glass, and Nathan Leopold of Leopold & Loeb notoriety), but her parents decided against it. Obama of course was a lecturer at the U. of Chicago law school for years.