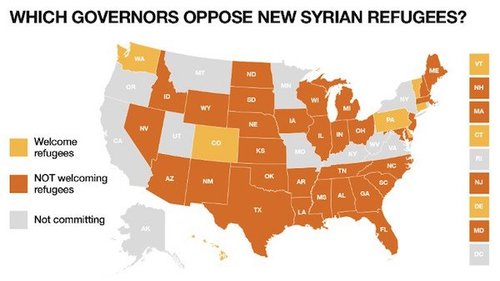 Obasma’s occasional profession of fondness for the rule of law is hardly consistent, particularly since the Syrian refugees became a thing. He insists federal law must be followed regarding refugee resettlement, but hypocritically refuses to crack down on states with unlawful sanctuary cities.

In response, more than half of the states’ governors have rejected Syrian refugees for their jurisdictions.

The Presidential decree to resettle Syrian Muslims (who cannot be screened because no database) is unpopular: a Rasmussen poll published November 19 found 60 percent of likely voters oppose the settling of Syrian refugees in the state where they live. An October Rasmussen survey (before the Paris jihad attacks) showed 56 percent of likely voters thought giving thousands of Syrians asylum will make America a more dangerous place.

On Saturday, Tucker Carlson discussed the Syrian refugee mess with J. Christian Adams, a former Justice Department official. Adams thinks the Syrians will be dependable Democrat voters in the future, so any danger of mass jihad murder is a non-concern to the President in comparison. (Interestingly, Obama remarked to reporter Bob Woodward a few years back that America could “absorb” another terror attack. Is that any way for the nation’s commander in chief to think?)

CARLSON: Here in the US, President Obama’s reminding governors across the country that they have no choice: they must allow refugees from that region into their states because he says so. The President’s Office of Refugee Resettlement sent a letter reiterating that point and I’m quoting, “States may not categorically deny ORR-funded benefits and services to Syrian refugees. . . any state with such a policy would not be in compliance with the State Plan requirements. . . and could be subject to enforcement action. including suspension or termination.” And yes, that is a threat. And yet some governors said the letter isn’t going to change their minds.

Former Justice Department official J. Christian Adams joins us live from Washington to explain this administration’s newfound commitment to the rule of law. Christian, great to see you this morning. So it’s The Law, and you have to follow The Law. That’s a new position from the Justice Department.

ADAMS: This is a president who always seems to put politics ahead of national security and the safety of the American people, Tucker. He’s right in a way. Under our current federal arrangement, states are subservient to the federal government on refugee, national security policies, but here’s the catch: the states could simply refuse to take federal money. That’s where they the federal government gets them, as they attach strings: they give the states money to process refugee services — social services for the refugees. If the states wanted to really put their money where their mouth is, they would say, “We’ll give up the federal money; we don’t want the refugees.” But it’s true that the states cannot just put them on a plane and send them back to Syria.

CARLSON: What’s so fascinating though, is that given all, the problems in the world Middle East in flames our country’s economy — it’s unclear what it even is —more people out of work than any time in the last forty years — the president is choosing this issue on which to take a stand. Why is that do you think?

ADAMS: Well, it’s part of a fundamental transformation. Don’t forget this is a president who sees changing the electorate in the long term through immigration policy. These refugees once they get US citizenship, once they have children, will tend to vote for big government Democrat policies. It’s a long-term game, so when you bring a 120,000 in, you’re not only helping the president’s political world view, but you are also endangering America.

I mean look, the vetting is inadequate here, Tucker. They’re asking whether they have ties to terror. That is not enough. You need to be looking into their attitudes toward jihad. It’s not just what they’ve done in the past and Syria for which there’s almost no data, there’s no database in Syria that you could look up this stuff. They need to be looking into what these people believe and what they might be willing to do and whether it will resemble things and places like Paris and London and all throughout Europe. Do we want America to start to look like Europe with these huge enclaves of refugees?

CARLSON: Unassimilated. So the rest of us see a threat; the President sees new voters. Is there nothing the state governors can do in response to this?

ADAMS: They could refuse to take the federal money. They can make it difficult. They could attempt to rearrange the relationship between Washington and the states. This is a great example where they would have the support of the American people, if they would just turn down the federal gravy train of money. This is a great example where the governors can put national security on a pedestal when the President won’t even give it any attention.

CARLSON: That would be nice but they be denying the pilgrims as the President said two days ago. Christian, thanks for coming in this morning.