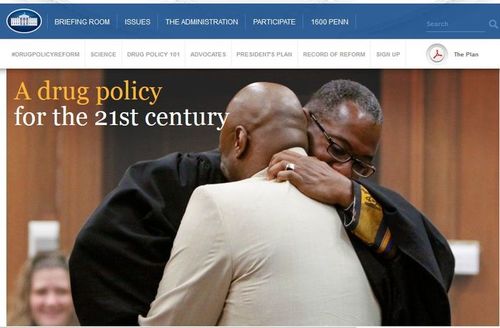 Above, a screenshot from Whitehouse.gov/ondcp/drugpolicyreform. On Saturday night, I illustrated Thomas Meehan's Obama’s Clemency Initiative—Putting Black And Hispanic Drug Distributors Back On The Streets Just In Time For The Riots, with the picture that forms the background image, and captioned it

We got an angry Facebook message from someone who'd clicked on the link asking if we could actually prove that the huggee was a dealer. (The story doesn't specify.)

Let me backtrack here—the White House put up this picture of a black Judge hugging a black (reformed) criminal with no explanation or link. VDARE.com provided the link to the story, using Google's reverse image search.

The story is about the NJ "drug court", which releases drug dealers and other drug criminals in return for an attempt to give up drugs themselves—"rehab". [ Drug court grads look back at a life-saving choice, By Anthony Coleman, Trenton Times, May 18, 2009] The man pictured is one of the success stories, hence the hug.

The story, starts with one dealer, Darryl Smith, who got off in return for going to rehab, and goes on to "similar stories of triumph and redemption".

What's important is that the Obama Administration chose this as a symbol of Obama Drug Policy, and it's a symbol of what we here at VDARE.com call "Minority Occupation Government."

The main story is about Obama letting a bunch of black and Hispanic dealers out early, because they got long sentences, frequently for dealing crack cocaine [Obama 22 sentence commutations focus on crack + black, The Clemency Report, April 2, 2015]. These aren't doubtful cases, or alleged, they're all guilty. Obama wrote one of them a nice letter.

On the "Minority Occupation Government" front, which Paul Kersey likes to refer to as "Black Run America", let's withdraw our attention from the many being hugged in this 2009 photo, to the hugger: the Honorable Gerald J. Council, P.J. Cr. (The initials mean that he's a drug court judge.) Here are three recent stories about Judge Council—you tell me what they represent about the future of the judicial system in "Black Run America".

Law360, New York (January 15, 2015 — An attorney for a presiding criminal judge in Mercer County attempted Thursday to clear up the intentions behind his client's alleged reference to subordinates as “little pet” and “hop-along,” which are among the allegations in an ethics complaint accusing the judge of demeaning court workers. [More]

TRENTON Members of the New Jersey defense bar want a state court disciplinary committee to investigate the presiding criminal judge in Mercer County for telling grand jurors during a sealed orientation session last year he was “absolutely offended” by sexual assault cases, according to a transcript of the proceeding obtained by The Trentonian.

Embattled Superior Court Judge Gerald Council is already being targeted by the Advisory Committee on Judicial Conduct, which filed an ethics complaint last April based on allegations he demeaned court employees by referring to them as “little pet” and “hop-along.”[More]

TRENTON Bail hearings were noticeably quieter Wednesday morning without colorful and demonstrative Superior Court Judge Gerald Council, who did not preside over the proceedings.

Superior Court Judge Timothy Lydon pinch hit for Council, whose absence comes a week after he came under fire for remarks he made to grand jurors expressing distaste for sexual assault cases.

While court officials painted his absence as unremarkable, it was a departure from the norm.[More]