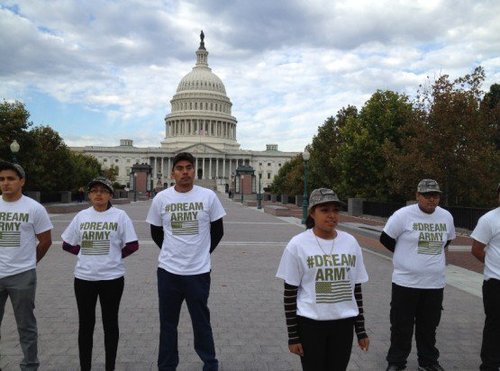 A small number of undocumented immigrants in the U.S. will have an opportunity to join the military for the first time in decades under a new Department of Defense policy unveiled Thursday.

For the first time, the program — known as Military Accessions in the National Interest, or MAVNI — will be open to immigrants without a proper visa if they came to the U.S. with their parents before age 16. More specifically, they must be approved under a 2012 Obama administration policy known as Deferred Action for Child Arrivals, or DACA.

The new Pentagon policy may be the first phase of a broader government-wide effort to ease pressure on immigrants and create new paths to citizenship. President Barack Obama, frustrated with the failure of Congress to pass any substantial immigration reform, has vowed to aggressively use his presidential authority to change the way immigration policies are carried out.

The "rare" language experience cited in the article includes such decidedly non-obscure tongues as Pashto, Persian, Arabic, and Chinese.  It is unclear why learning foreign languages or obtaining health care training is now one of those jobs Americans can't do.  It's also unclear how the government can trust the supposed medical credentials of those who lack the documentation to even be in the country legally.

But, as Richard Spencer has said in the past, we have a government that doesn't govern.  Even institutions like the military are not used to defend the country anymore.  They are simply excuses to push through a political agenda of demographic transformation and multiculturalism.

So why is the country recruiting illegals at the same time American citizens are finding it harder to join the Armed Services?  Because under Obama the military is not about defending the country anymore than Eric Holder's Justice Department was about enforcing the laws.  It's about enlisting the military to serve the President's agenda.  The only war our government is interested in fighting is the War on Whites.