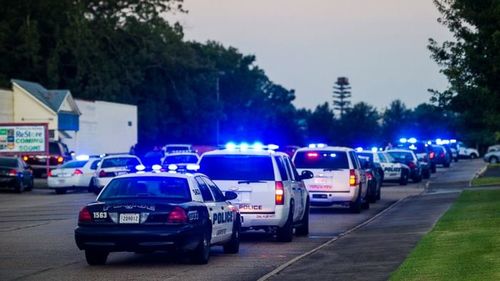 A  shooting in Louisiana is the occasion for a helpful description in the MSM:

DEVELOPING: A gunman killed two people and injured seven others late Thursday when he opened fire in a Lafayette, La. movie theater before turning the gun on himself, the city's police chief said.

Police Chief Jim Craft told a news conference that authorities had identified the gunman as a 58-year-old white man, but did not release his name, citing an ongoing background check. The chief added that the conditions of the injured victims ranged from critical to non-life-threatening.

City Marshal Brian Pope told The Daily Advertiser that the gunman opened fire at the Grand 16 Theatre in Lafayette, approximately 40 miles east of Baton Rouge. ... The shooting happened about 20 minutes into a 7 p.m. showing of the movie "Train Wreck," according to The Daily Advertiser, which quoted theatergoer Katie Domingue.

"We heard a loud pop we thought was a firecracker," Domingue told the newspaper. Domingue said she saw "an older white man" standing up and shooting down into the theater, but not in her direction.

"He wasn't saying anything. I didn't hear anybody screaming either," Domingue said.

Domingue told the newspaper she heard about six shots before she and her fiance ran to the nearest exist, leaving behind her shoes and purse.

La. Gov. Bobby Jindal said in a tweet that he was on his way to the scene.

When I think of all the effort I have to go to to find out when it isn't a white man, and the way even witnessses and reporters don't want to say it was a black or an immigrant who did the shooting, it's instructive to see how simple it is for them to say it when they want to.