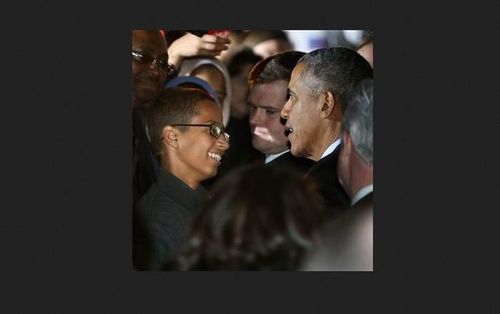 Obama Hugs Clock Inventor: "Without Your Inventing the Clock, Mini-Me, We Couldn't Have Started on Time"

While Josh Earnest, the White House press secretary, said earlier on Monday that Mr. Obama did not plan to meet with Ahmed, the president did speak briefly with the boy and gave him a hug. Ahmed made his way to the front of the crowd after Mr. Obama delivered a speech.

As for the clock, Ahmed told The Dallas Morning News that he had been too busy traveling to get it and bring it with him.

Or maybe the Secret Service told him they’d throw his bomb-shaped disassembled clock in the Potomac, like the police chief of St. Michaels, MD told me he was going to have the bomb squad robot heave my package into Chesapeake Bay unless I could prove they were just my new business cards and not an IRA plastic explosive device that would finally finish off Mrs. Thatcher.

So, what’s next for Clock Boy? He’s gotten his Presidential hug, but drew blanks on the Nobel  Prizes and Genius Grants. He appears to have more or less dropped out of school.

I’d say he should apply for membership in the Kardashian family and let Kris Jenner take over managing his career. There was almost an opening this week in the K family, but it looks like Khloe Kardashian’s husband, former NBA disappointment Lamar Odom, will pull through from his Viagra, cocaine, and tranny overdose at the Love Ranch. But I think Clock Boy has gotten about as far as he can under his father’s amateur management and would need a real pro like Kris Jenner to take him to the next level of never having to go back to school or work or anything ever again.