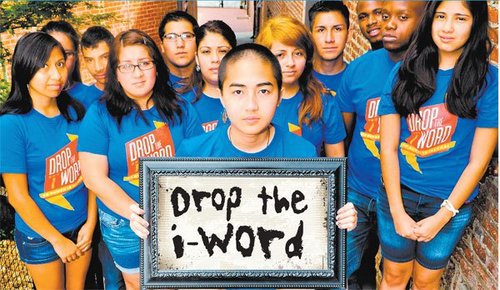 The fight for immigration in the national interest ("immigration sanity" for short) includes struggle to control the language of the debate.  To a distracted public, for example, "reform" is an unfortunately warm&fuzzy word.  Thus if the open-borders nation-wreckers can get journalists to babble "immigration reform" when the actual subject is mass-amnesty-plus-doubled-legal-immigration, they've gained a big advantage.

The term "illegal alien" is an especial bête noire for the nation-wreckers, so they routinely try to have it suppressed.  Unfortunately for the cause of immigration sanity, they've had substantial success, as one such suppressor wrote (Let’s retire ‘illegal alien,’ by Antonio Sierra) in the East Oregonian (Pendleton's newspaper) on October 9th.

Fortunately, Mr. Sierra's exercise in evasion and misdirection—read it for yourself!—was promptly and thoroughly countered by a letter to the editor, reproduced in full here:

Staff writer Antonio Sierra exposed himself as an illegal immigration advocate who used intellectually dishonest rhetoric to manipulate Americans into accepting foreign lawlessness in our country. His rant against legal language, citizens and immigration law was meant to shame Americans into a paralysis of self-censorship, but he will fail if we understand the tactics he used.

To elevate illegal invasion to the status of normal immigration, Sierra first tried to commandeer our terminology by convoluting logic. By relabeling illegal aliens as regular “immigrants,” and using the fact that regular immigrants become citizens, he argued that illegal aliens are also de facto future citizens. Sierra also tried to blur the distinction between legal and illegal entry by calling any reformist legislation “anti-immigrant.” Confused yet? He hopes so.

As with other illegal alien supporters, Sierra dismissed criticism of illegal immigration by stating “No human is illegal” — a slogan that appears at every illegal alien rally. No border enforcer ever claimed that humans were illegal, but that they were sneaking illegally into the U.S. File Sierra’s criticism under “Diversionary Tactics,” and if Sierra ever confronts a burglar in his house, I hope he remembers his own adage that because this human is legally alive, he couldn’t have broken any law.

Lawbreakers typically feel bad or embarrassed when they hear an accurate description of their behavior, but this shouldn’t stop citizens from calling it as it is. If we applied Sierra’s sanitized and manipulative language to other forms of subversion, then drug dealers would be “undocumented pharmacists” and human smugglers would be “irregular tour guides.” It’s bad enough that propagandists are called “journalists.”

The Vandermolen letter is a classic, not only making substantial points but also aiming well-stated derision at obvious ax-grinder Sierra.  And she did it using only 269 words, well under the paper's (rather generous) 400-word limit.

However, there was a notable claim in Antonio Sierra's initiating op-ed that Vandermoelen's superb letter didn't address:

["Illegal alien" is a] dogwhistle term that’s become synonymous with stereotypes against Mexican and Central American immigrants, and a tired one at that — mainly that most come to the U.S. to steal jobs, commit crimes and bilk the American welfare system.

While illegal alien could ostensibly apply to immigrants from any country, the term specifically evolved from a derogatory name for immigrants that swam across the Rio Grande River to cross the border.

The Atlantic’s Garrett Epps tracked down one of the earliest uses of illegal aliens to a 1950s Stanford Law Review article entitled “Wetbacks: Can the States Curb Illegal Entry?”

The article by Epps that Sierra referred to turns out to be a snarky piece, How Rand Paul Misunderstands the Fourteenth Amendment, posted at The Atlantic's website on September 24, 2015.  (Snark?  Note Epps's sidesplitter about "a small gray alien in a disk-shaped spacecraft.")  And since he relied on the Epps article for his claim about the provenance of "illegal alien," it's notable what Mr. Sierra left out, as I put it in my own letter to the East Oregonian, published on October 15 (dated October 14 online):

But what Sierra omitted is that Epps had identified an even earlier appearance, writing “[T]he earliest use [of the term] I can find is in 1950, when a federal appeals court used it to describe a Polish-born Mexican citizen whom Immigration and Naturalization Service officers had arrested.”

Fancy that: A federal appeals court! Judges at that level generally are sticklers for precise language. So we shouldn’t be surprised that “illegal alien” appears in fundamental U.S. law. One example is Title 8, Section 1365 of the United States Code, entitled “Reimbursement of States for costs of incarcerating illegal aliens and certain Cuban nationals.” (The text of that section also employs the term.)

On the other hand, Sierra’s favored language, “undocumented immigrant,” is clearly intended to make it sound as if what’s at issue is a mere paperwork snafu of negligible importance, rather than the serious lawbreaking inherent in illegal immigration.

People who obscure what’s at stake by beating their drums for euphemisms like “undocumented immigrant” bring to mind George Orwell’s great essay, “Politics and the English Language.” A highlight: “Political language … is designed to make lies sound truthful and murder respectable, and to give an appearance of solidity to pure wind.”

The Atlantic's Epps "teaches constitutional law and creative writing for law students at the University of Baltimore."  Thus—despite what appear to be strong anchor-baby sympathies in his September 24th article—I assume he reported accurately on that early find of "illegal alien" in federal court documents.

So that's a useful datum for all of us immigration-sanity patriots to remember: A federal appeals court coined the term "illegal alien" in 1950.