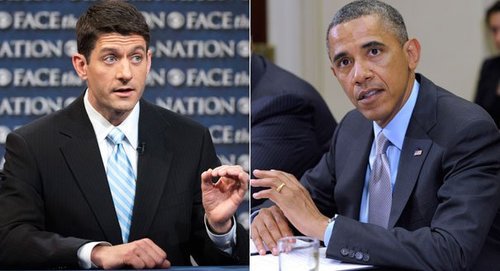 Obama Doubles Down On Amnesty—And It's Paul Ryan's Fault!

The final part of the Obama Regime Administrative Amnesty has been leaked.  It appears that U.S. Citizenship and Immigration Services (USCIS) is openly contemplating giving employment authorization to the 20-30 million illegal aliens in the United States.  Interesting enough, it appears that the Slave Power, Zuckerberg, etc. are against this as it will enable H-1Bs and L-1s to escape from indentured servitude.

The memorandum appears to be a discussion of a complete amnesty disguised as a granting of an Employment Authorization Document (EAD) to those who have filed for an immigrant visa based on employment in the United States, Form I-140, Immigrant Petition For Alien Worker, but the scope of the discussion in the memorandum is well beyond those aliens with an employer legally able to sponsor a worker. Clearly the discussion is about a general amnesty using EADs.  Interestingly enough, there is no discussion on the legality of the action, only the political and economic consequences.

A newly leaked internal DHS memorandum produced for an off-the-record agency conclave reveals that the Obama administration is actively planning to circumvent a federal court injunction that suspended part of last November’s deferral-based amnesty initiative. The document, apparently prepared as follow-up from a DHS “Regulations Retreat” last summer, appears sure to re-ignite concerns in Congress as well as federal judges in the Fifth Circuit. The Administration has already been criticized from the bench for handing out work permits to hundreds of thousands of deferred action beneficiaries, in direct violation of a district court’s order. With the Fifth Circuit Court of Appeals deciding any day now whether to deny the Administration’s request to reverse that injunction, this public leak has come at a critical juncture for U.S. enforcement policy.

Last June, four months after Texas federal judge Andrew Hanen’s order to freeze President’s DAPA and Expanded DACA programs—disclosure: the Immigration Reform Law Institute has filed briefs in these cases—DHS’s immigration policy makers apparently held a “Regulations Retreat” to discuss “different options” for “open market Employment Authorization Document (EAD) regulatory changes.” EAD is the statutory term for work permits. From a memo recording these discussions, we now know that the Obama DHS has, rather than pausing to allow the courts to assess the constitutionality of its enforcement nullification initiatives, been gearing up to roll out one or more of four plans drawn up at the meeting, each one designed to provide EADs to millions of nonimmigrants, including those lawfully present and visa overstayers, crippling the actual employment-based visa system on the federal statute-book.

Now, to the uninitiated, it appears to be a win for the joint effort of the Slave Power and the Ethno-Cultural Marxists in their war on the historic American nation.  However, the debate in the memorandum appears to be between those anti-white racists and the Zuckerberg Slave Power.  The Slave Power has no interest in the great mass of illegal aliens as a bottom line.  They may generally hate whites, as is their wont, but that is not what they are in business for, which is profits, and the indentured servitude of H-1Bs, L-1s, and other non-immigrant visa holders is their primary interest in the amnesty debate.  Of the options, #4 excludes H-1Bs and L-1s, pandering to the Slave Power and the Treason Bar, forcing H-1Bs and L-1s to remain in indentured servitude and to leave that status requires the services of an attorney from the Treason Bar.

It appears that there is now a falling out between the brown racists and the Slave Power Zuckerberg Edition, who want amnesty for all, including the Facebook Google slaves.  Option 4 is clearly the one the Obama Regime is looking towards, but there appears to be a problem with the Marxists.

There is also background activity whereby immigration lawyers and companies are working very hard to derail EAD for I140 fix. They are trying all sorts of ways to derail or water down this fix that we have worked for years.

Immigration lawyers and companies want this fix to be only applied to those with 'Extraordinary Circumstances' i.e. where employee can show economic hardship, exploitation by employer etc. They are trying to water down so no more than 600 people in an year would be able to benefit from this fix.

However, there appear to be no options to fix this, which appears to be part of the plan, as this did not come out until the John Boehner-Paul Ryan surrender on the budget; two years for Obama to act without any chance of any budget riders restricting their expansion of the Obama Regime Administrative Amnesty.  The Ryan-Obama fix appears to have been in from the start, no wonder Luis Gutierrez endorsed Ryan.