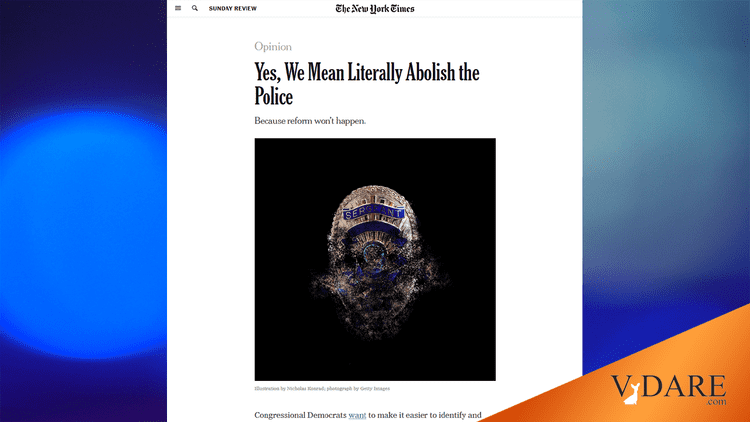 Mariame Kaba (@prisonculture) is the director of Project NIA, a grass-roots group that works to end youth incarceration, and an anti-criminalization organizer.

…Congressional Democrats want to make it easier to identify and prosecute police misconduct; Joe Biden wants to give police departments $300 million. But efforts to solve police violence through liberal reforms like these have failed for nearly a century.

Enough. We can’t reform the police. The only way to diminish police violence is to reduce contact between the public and the police.

… So when you see a police officer pressing his knee into a black man’s neck until he dies, that’s the logical result of policing in America. When a police officer brutalizes a black person, he is doing what he sees as his job.

Now two weeks of nationwide protests have led some to call for defunding the police, while others argue that doing so would make us less safe. …

We can’t simply change their job descriptions to focus on the worst of the worst criminals. That’s not what they are set up to do.

Second, a “safe” world is not one in which the police keep black and other marginalized people in check through threats of arrest, incarceration, violence and death.

The concept of the state having a monopoly on violence is so over.

I’ve been advocating the abolition of the police for years. Regardless of your view on police power — whether you want to get rid of the police or simply to make them less violent — here’s an immediate demand we can all make: Cut the number of police in half and cut their budget in half. Fewer police officers equals fewer opportunities for them to brutalize and kill people. The idea is gaining traction in Minneapolis, Dallas, Los Angeles and other cities.

… The surest way of reducing police violence is to reduce the power of the police, by cutting budgets and the number of officers.

But don’t get me wrong. We are not abandoning our communities to violence. We don’t want to just close police departments. We want to make them unnecessary.

We should redirect the billions that now go to police departments toward providing health care, housing, education and good jobs. If we did this, there would be less need for the police in the first place.

Of course. Why hasn’t this idea ever been tried? I’ve studied American history closely up to the most recent event of any importance — the death of Emmett Till — and have never heard of the government spending money on health care, housing, education and good jobs. How do we know it won’t work until we try it?

We can build other ways of responding to harms in our society. Trained “community care workers” could do mental-health checks if someone needs help. Towns could use restorative-justice models instead of throwing people in prison. …

When people, especially white people, consider a world without the police, they envision a society as violent as our current one, merely without law enforcement — and they shudder. As a society, we have been so indoctrinated with the idea that we solve problems by policing and caging people that many cannot imagine anything other than prisons and the police as solutions to violence and harm.

People like me who want to abolish prisons and police, however, have a vision of a different society, built on cooperation instead of individualism, on mutual aid instead of self-preservation. What would the country look like if it had billions of extra dollars to spend on housing, food and education for all? This change in society wouldn’t happen immediately, but the protests show that many people are ready to embrace a different vision of safety and justice.