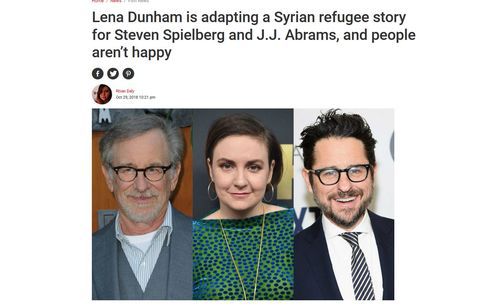 Lena Dunham Not Levantine Enough For The Woke

Lena Dunham is set to write the screenplay for a film adaptation of a Syrian refugee story for Steven Spielberg and J.J. Abrams.

A Hope More Powerful Than the Sea: One Refugee’s Incredible Story of Love, Loss, and Survival

My eyes glazed over about 40% of the way through that book title.

by UN High Commissioner Melissa Fleming tells the true story of Doaa Al-Zamel, who fled Syria in 2011 when civil war broke out. …

Not everyone’s response was so positive, however. Some Twitter users pointed out that hiring a white woman to tell the story of a Syrian refugee was inappropriate. “@lenadunham constantly talks about representation as crucial to enrich storytelling,” wrote journalist Daniel Medina.

“Yet, in practice, she has shown a disregard for actually elevating those voices. Now, she’s been signed on to write a Syrian refugee’s story? Hollywood, was no female Arab writer available?”

They should make Lena Dunham co-write and co-direct with Phoenician-American N.N. Taleb.

It’s interesting that the now omnipresent pejorative “whiteness” may have first swum into my ken in early 2012 involving Lena Dunham’s TV show Girls:

The first signs of the mental breakdown in liberal America that became broadly visible in 2013 started to become noticeable in early 2012, probably tied in some way to Obama’s re-election drive.