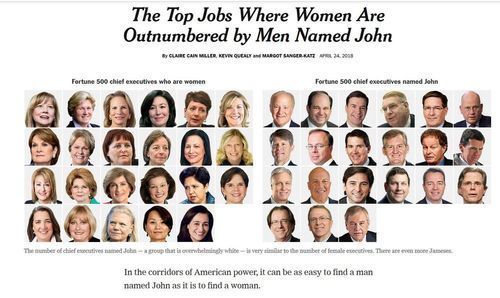 NYT: Unbearable Whiteness of Everything

The Top Jobs Where Women Are Outnumbered by Men Named John

The number of chief executives named John — a group that is overwhelmingly white — is very similar to the number of female executives. There are even more Jameses.

… The prevalence of men in power with particular names is revealing not only of skewed gender representation, but also of the whiteness of many institutions of American politics, culture and education. White men continue to dominate many categories of leadership in America, as our Times colleagues showed in an analysis in 2016.

Now that the New York Times has shone the spotlight on the whiteness of the Fortune 500 names, I am looking forward to the NYT’s followup on the Forbes 400 of the Jewishness of the first and/or last names of America’s billionaires.

They are going to do that analysis, right?