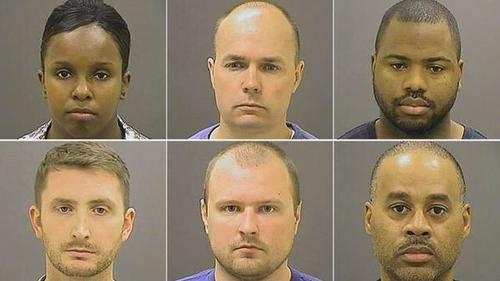 That didn’t fit The Narrative, but now the New York Times has regrouped and got back on message:

Suspects in Freddie Gray Case: A Portrait of Baltimore Police in Miniature

BALTIMORE — The first police officer Freddie Gray encountered on the morning he sustained a fatal spinal cord injury was Lt. Brian Rice, a seasoned 41-year-old white law enforcement officer who, several years earlier, had his guns confiscated by deputies who took him to a hospital after a worried ex-girlfriend expressed alarm about his well-being.

About 40 minutes later, when Mr. Gray, who was black, lay shackled in a police van and was no longer breathing, Sgt. Alicia White — a 30-year-old churchgoing black woman with a reputation as a rising star — tried to remove him. “She’s not even the type of person that would jaywalk,” one neighbor said.

In between, Mr. Gray was subdued and handcuffed by two rookie bicycle officers, each in his 20s, both white. A 25-year-old black patrolman arrived to check on him. The van driver, Officer Caesar Goodson, also black, is an old-timer at 45. Described by colleagues as “passive,” he never moved up the ranks.

Goodson, the black driver, was the only cop charged by the black prosecutor with the worst crime, second-degree murder, but he’s “passive” so he can hardly be as culpable as those white rookies who “subdued and handcuffed” Mr. Gray. And the third black cop just “arrived to check on him” so, clearly, the white cops are the bad guys.