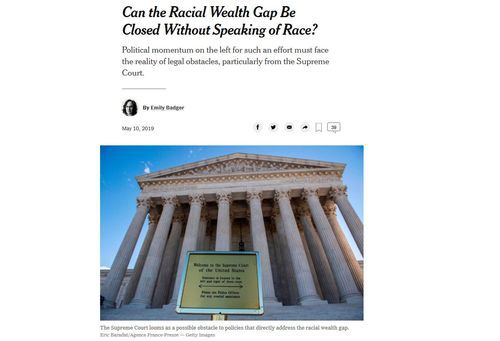 Can the Racial Wealth Gap Be Closed Without Speaking of Race?

Political momentum on the left for such an effort must face the reality of legal obstacles, particularly from the Supreme Court.

The Supreme Court looms as a possible obstacle to policies that directly address the racial wealth gap.

Elizabeth Warren wants to offer down-payment assistance to home buyers in formerly “redlined” neighborhoods where the federal government once denied access to mortgages. Cory Booker would like to create “baby bonds” that would be worth more to children in poorer families, helping them one day to buy houses or other assets.

Both presidential candidates say their proposals would aid in narrowing the enduring black-white wealth gap in America. But neither policy attempts to do that in the most direct way possible — by steering benefits to African-Americans.

Oh, wait, that never once occurred to you, Emily Badger? In fact, your brain is currently getting very tired and sleepy?

Their ideas, along with several others that scholars advocate, are facing a tricky problem today. There’s growing momentum on the left to address the racial wealth gap. But the prospects for race-based policies before the Supreme Court are unpromising, and that’s unlikely to change with five conservative justices.

The court is unlikely to uphold baby bonds or housing programs explicitly for African-Americans, even to remedy disparities created when many government benefits were explicitly for whites. Affirmative action and government contracting programs have similarly struggled to meet or skirt the court’s strict scrutiny for applying benefits by race.

And yet, they seem to keep on existing after 50 years of scandal. Funny how that works …

Proponents concerned about the wealth gap instead must come up with policies that have the effect of disproportionately building wealth for African-Americans, without singling them out.

“There are ways that you can craft legislation that essentially gets at this effect,” Ms. Baradaran said. “Look at how much legislation we have that gets at the opposite effect.”

Similarly, “So do tax advantages for the rich, who are more likely to be Jewish.” But, what, your brain is undergoing massive crimestop, Emily?

Other researchers argue that a program based on neighborhoods redlined in the 1930s would be too narrow; most African-Americans who buy homes aren’t purchasing in such neighborhoods today (and in some cities, middle-income whites are).

… But in the end, that may close the racial wealth gap only so much. Today, African-Americans make up about 13 percent of the population, but hold only 2.6 percent of the country’s wealth, said William Darity, a professor at Duke who has also worked on the baby bonds proposal. He wants to see those numbers equalized.

“That’s an objective that is not achieved by any of the existing policies on the table now,” Mr. Darity said. “Ultimately, you need a person-based program if you’re really concerned about the racial wealth gap. And it not only has to be person-based, but it has to be race-specific.”

That would look, he said, like another idea that has gotten attention — albeit with far fewer details — on the campaign trail: a comprehensive reparations program.

Emily Badger writes about cities and urban policy for The Upshot from the Washington bureau. She’s particularly interested in housing, transportation and inequality — and how they’re all connected. She joined The Times in 2016 from The Washington Post. @emilymbadger