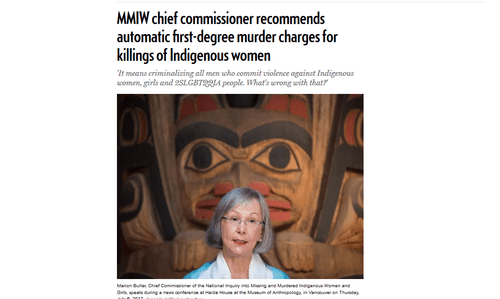 ‘It means criminalizing all men who commit violence against Indigenous women, girls and 2SLGBTQQIA people. What’s wrong with that?’

OTTAWA — The chief commissioner of the national inquiry into missing and murdered Indigenous women is recommending the justice system be tougher on people who commit crimes against Indigenous women, girls and LGBT people, saying the government must prove their lives are valued.

In a taste of what’s to come when the national inquiry releases its final report next month, Marion Buller told a parliamentary committee this week that homicides involving Indigenous women must be treated automatically as first-degree murder.

Presumably, most Indigenous women in Canada who are murdered are murdered by Indigenous men who are drunk and enraged and soon regretful they just murdered their loved one. But if you want to automatically make that first degree murder …

She also said that in criminal cases where the complainant is an Indigenous woman, judges must consider that fact as an aggravating factor when sentencing the offender.

Uh, I thought goodthinkers in Canada were concerned that Indigenous men make up such a disproportionate fraction of the incarcerated …

… First-degree murder charges, which can lead to the severest sentences under Canadian law, normally require proof that a killing was “planned and deliberate.” Under the Criminal Code, however, the murder of a police officer or prison employee results in an automatic first-degree charge — the only category of people whom the law currently sets apart in this way. The code also decrees that killings in the course of sexual assault, aircraft hijacking, kidnapping or hostage-taking come with automatic first-degree charges, as do murders resulting from terrorist or organized criminal activity, or in the context of criminal harassment or intimidation.

… However, Tony Paisana, a Vancouver-based defence lawyer, raised concerns about Buller’s recommendations, arguing the Criminal Code should not be “picking and choosing which communities are more important.”

… Paisana, who appeared before the Senate committee last week on behalf of the Canadian Bar Association, said that in many cases, the perpetrators of violence against Indigenous women are Indigenous men, and that Buller’s recommendations could lead to stiffer punishments for a population that’s already over-represented in Canadian prisons. “You’re perpetuating the over-incarceration of Indigenous people,” he said. “The answer is not punishing people more, full stop.”

Courts are already supposed to take offenders’ Indigenous identity into account during sentencing, in an attempt to recognize the factors that can place them at a disadvantage, including the legacy of residential schools, poverty and substance abuse. In her testimony, Buller spoke about the importance of this principle. But she also said the inquiry heard from families and survivors who feel it simply leads to lighter sentences for Indigenous offenders. Having judges also consider the Indigenous identity of victims as an aggravating factor “doesn’t necessarily outweigh or negate” that principle, she said — it just means both factors have to be balanced.

… But in her interview with the Post, Buller said her recommendation about sentencing “should have been in Bill C-75,” and disputed the idea that the changes would disproportionately punish Indigenous men, pointing out that they are not the only perpetrators of violence against Indigenous women.

“The sentence has to reflect not only the gravity of the offence but also the circumstances of the offender. And so does that mean criminalizing Indigenous men? Well, it means criminalizing all men who commit violence against Indigenous women, girls and 2SLGBTQQIA people,” she said. “What’s wrong with that?”

So, it appears that the Good People’s efforts to punish Indigenous men less has gotten Indigenous women murdered more, but nobody can quite come out and say that.

Clearly, the problem is that white men don’t murder enough Indigenous women. If reality was more like “Law & Order: Nunavut” we wouldn’t be having these problems.