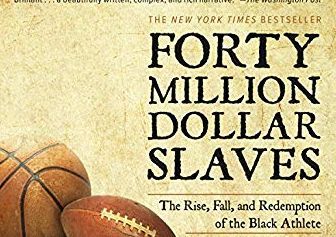 The NYT’s 1619 project to “reframe the country’s history, understanding 1619 as our true founding, and placing the consequences of slavery and the contributions of black Americans at the very center of the story we tell ourselves about who we are,” which sounds like a parody I wrote but is actually real, is off to a surprising start. Instead of having a black lady write about her hair, the Times has a black guy write about basketball. That’s totally nonstereotypical!

Is Slavery’s Legacy in the Power Dynamics of Sports?

In the N.B.A., the very term “owner” has come under fire, as players, most of whom are black, assert self-determination.

There is no other business like the N.B.A. Its rainbow jump shots, rim-rattling dunks and heart-pounding drama are gleaming monuments to black America. Nearly 80 percent of league players are black. They are multimillionaire superstars, international icons and global purveyors of African-American excellence and culture.

Yet, for all of their success, most of them cannot look at N.B.A. leadership and see their own reflections. The vast majority of head coaches are white, as are most general managers and other league executives. Of the men and women with controlling interests in N.B.A. teams, only one, Michael Jordan of the Charlotte Hornets, looks like most of the players on his team.

This stark divide, and the familiar questions it raises about white people overseeing the toil of African-Americans, adds a layer of tension that ripples just beneath the glamour of the N.B.A. Much of what transpires in the league can be seen through the lens of race, especially this summer, when players upended the usual power dynamics by forcing a flurry of trades and transformational free-agent signings.

Consider the debate sparked by Draymond Green, the Golden State Warriors’ voluble All-Star forward, when he cast a wary eye on the league, its power structure and its racial tensions.

In a string of public comments last fall that included an appearance on LeBron James’s HBO talk show, Green questioned how the white men and women who control all but one of the N.B.A’.s 30 teams are described.

It has been 400 years since chattel slavery began in what is now the United States. But Green suggested that the lexicon of 1619 — with African slaves and white owners, with people as currency — should be reworked when it comes to a business with the N.B.A.’s racial dynamic.

His remedy? “Maybe use the word ‘chairman’ instead.”

The league was already steering away from “owner,” though no official edict has been issued and Commissioner Adam Silver has said he’s fine with the word when it’s used in careful context. At N.B.A. headquarters, officials use “governor” as often as possible. Nonetheless, Silver told The New York Times in a recent interview that Green’s commentary was important.